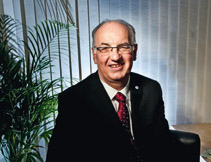 The government has handed Doncaster Council £1.29m to pay for a team of project managers to help turn around its failing children’s services department.

Chris Pratt, director of the children and young people’s service, says that four project staff are already working on improving the department and it is now looking to use the extra money to recruit a team of project managers and two project directors.

One of these director-level posts will specifically look at the children and young people in care service.

He said: “Additional resources in the form of project directors and project managers are needed to support management and staff in the delivery of what is a major and complex improvement programme.”

Details of the extra government funding, which will run out in March next year, were presented to members of the council’s Schools, Children and Young People Overview and Scrutiny Panel this week.

The government intervened in the running of the council’s children’s services in March 2009. This followed the deaths of seven children in the area through abuse or neglect.

Despite this intervention, a report presented to the scrutiny panel in June found that outcomes for children had got worse during the last quarter of 2009. Obesity rates and teenage pregnancy rates were up, while and school attainment was down.

Performance had also got worse in areas such as timely child protection conferences, and initial and core assessments.

Are you a childcare provider working in the Doncaster area? What are your main concerns or suggestions on how children’s services could be improved? Drop your comments below to enter the discussion!