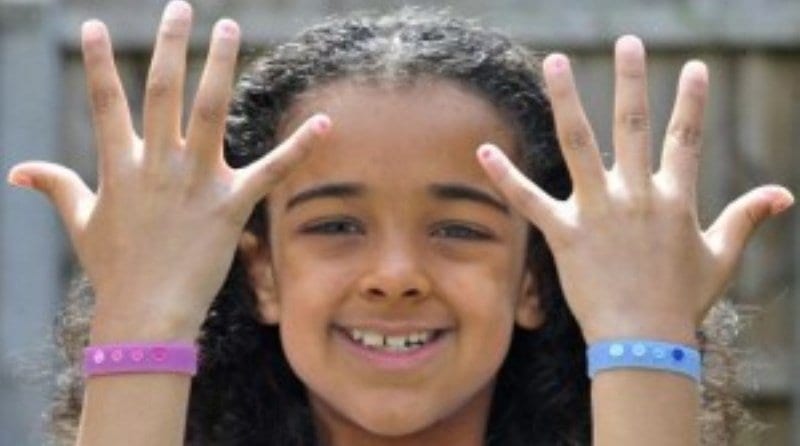 A nursery owner from Birmingham has invented a pioneering product to protect children from skin cancer.

Bali Carty, of Tiny Tots Nursery, in Handsworth Wood, has created Sunbands – which are worn around the wrist and detect harmful ultraviolet (UV) rays.

Sunbands get darker in colour as the rays of the sun become more dangerous – warning youngsters when they need to go and play inside or slap on more suncream. Bali, aged 29, has achieved a patent for the Sunband and is now hoping to attract leading supermarkets to sell the product ahead of a potential summer heatwave.

It comes as skin cancer rates for young people in the Midlands, aged 15 to 24, have soared by more than 50 per cent.

“It is the first product of its kind in the world,” said Bali, a former Handsworth Girls School pupil. “All the Sunbands start as white and gradually change colour through higher levels of UV.

“I came up with the idea because working at a nursery made me realise parents are concerned about their children being in the sun for too long, but don’t always know when the sun is starting to cause any damage.

“By creating a wristband, the product is something trendy for children to wear while keeping them safe.”

UV rays are an invisible energy from the sun that are not felt immediately.

Over-exposure can burn the skin, hair and eyes and lead to skin cancer, premature ageing and eye disorders such as cataracts.

The wristbands have a sun sensitive gauge that is made of photosensitive material which changes colour with the intensity of UV radiation.

At its darkest shade, the Sunband warns that UV levels are at their most harmful, above 11.

Latest figures show 825 people are struck with skin cancer every year in the region including one person aged between 15 to 24 every week.

Young women are twice as likely to get the killer disease, particularly in their legs and hip, while young men are prone to getting the cancer on their chests.

What do you think of the wristband invention? Would you use them in your nursery setting? Do you think children would take notice of when the wristband says it is time to go inside? Join the discussion by leaving your comments below!