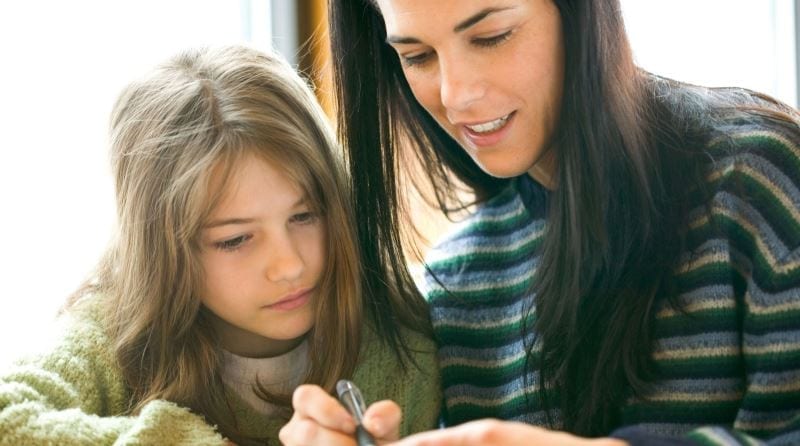 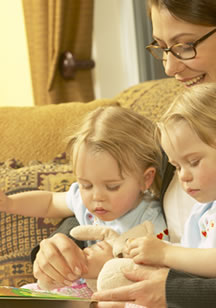 Parents should read to their children for 15 minutes each day

Parents should adopt a “five-a-day” approach, with daily activities to help children reach their full potential, a report has said.

Its steps include reading to their child, praising them and talking to them with the television switched off.

It said there was “dramatic” evidence that providing children with quality care in their early years was crucial.

The report suggests the government should adopt a model similar to the five-a-day scheme which encourages people to eat fruit and vegetables, to give parents manageable steps.

CentreForum says better parenting is crucial if the government is to realise its aim of improving social mobility.

Children’s minister Sarah Teather welcomed the proposals and said they would be considered as the government compiled its parenting strategy.

The report said there was “overwhelming” evidence that intervention in a child’s earliest years was dramatically more effective than try to make remedial efforts at school age.

The report’s author, Chris Paterson, said the most important factor influencing a child’s intellectual and social development was the quality of parenting and care they received.

He said evidence suggested children from poorer backgrounds were much less likely to experience a “rich home learning environment” than those growing up in wealthier households.

Studies showed that more affluent parents spent more time reading to their children and talking to them and were more likely to praise them than tell them off, he said.

He said mothers and fathers from all backgrounds could make a difference to their children’s life chances by following some simple rules.

“Parents from all social and educational backgrounds can and do provide home environments that are highly conducive to child development,” the report said. 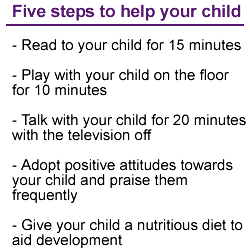 Mr Paterson told the BBC it should not be assumed that everyone knew how to be a good parent.

“This isn’t an approach you would adopt in any other walk of life and it isn’t the approach that’s taken to adopting couples, for example, who will be given sort-of specific areas of study in relation to children,” he said.

“What we’re getting at is that all people can benefit from actually just being given information.”

Ms Teather said: “Raising greater awareness of the importance of high quality parenting skills and building strong family relationships for children in the foundation years and beyond is invaluable,” she said.

“I will be interested to hear the views of the sector on the report’s suggestion of “five-a-day for child development” as we take forward (our) ambitions.”

Gareth Jenkins, from the charity Save the Children, said the report was very useful because it drew attention to an issue that made a big difference to children.

“We think that the government needs to give extra priority in terms of its spending to supporting families and children, especially children in their early years, so that we can give our children the best possible start in life.”