Research by the Think Tank Policy Exchange, reveals that 79% of childminders and nurseries in better-off neighbourhoods were judged by Ofsted to be “Good” or “Outstanding”, compared with 64% in the most deprived areas. This quality gap comes as the Education Minister, Liz Truss, prepares to relax rules over childcare ratios. 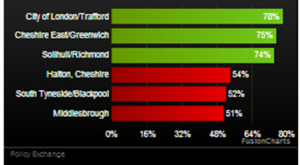 The research also reveals a gap between the educational development of children in rich and poor areas as they prepare to start school. The qualifications of childminders and nursery workers are lower in the most disadvantaged areas, while the vocabulary development of the poorest children is 16 months behind those from the highest-income families.

Academic studies have shown that, although better qualified childcare staff improve the outcomes for children, only one in ten childminders and just over one in five daycare staff hold a qualification above an A-level or equivalent.

The Education Minister, Liz Truss, said to the Sunday Times: ‘Nursery staff have a job of educating. It is not just looking after children. These are the early years and they are crucial. Just as no school is ever better than the quality of people in that school, exactly the same is true of nurseries’.

According to the Telegraph, the Education Minister will announce plans at a Policy Exchange speech on Tuesday to force nursery workers to have GCSE Maths and English qualifications to lift standards among childcare workers.

The overhaul is designed to make “childcare in the UK cheaper” by allowing nurseries to take on more children without having to increase staff. The Government hopes the reforms will encourage more people into what has historically been a low-paid profession.

Last week, the Financial Times reported that Ministers are also working on a package of up to £1.5bn in support, offering families with young children at least £1,000 a year in childcare vouchers to help pay for nurseries, nannies and childminders.

Share your views with us on the statistics revealed from this report.