Increases in minimum wage to include apprentices. 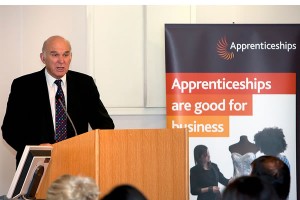 Ministers have also rejected a recommendation from the Low Pay Commission that the rate for apprentices should be frozen, announcing a 3p increase to £2.68 an hour.

Business Secretary Vince Cable said: “The independent Low Pay Commission plays a crucial role in advising the Government when setting the national minimum wage every year. It balances wages of low paid workers against employment prospects if the rate was set too high.

“We are accepting its recommendations for the adult and youth rate increases, which I am confident strikes this balance. However, there is worrying evidence that a significant number of employers are not paying apprentices the relevant minimum wage rate.

“Apprenticeships are at the heart of our goal to support a stronger economy, and so it is important to continue to make them attractive to young people. Therefore, I am not taking forward the LPC’s recommendation to freeze the apprenticeship rate due to non-compliance, but instead am raising it in line with the youth rates. We are working on a series of tough new measures to ensure we tackle non-compliance issues across the board.”

TUC general secretary Frances O’Grady said: “Boosting the incomes of the low paid goes straight into the economy and wage-led growth must be part of the recovery so we would have liked to have seen minimum wage rates go up further today, even if the Government has rightly rejected calls for a freeze.

“But we are pleased that ministers have increased the apprenticeship rate. This sends a positive signal about the importance of apprentices.

“We will continue to press ministers for more action to ensure the minimum wage is properly enforced – particularly for apprentices where there is considerable evidence that many miss out. It is time to get tough with wage-cheat employers who break this law.

“We will continue to urge the many employers who can afford it to implement a full living wage for their staff.”