A major study of childcare has released evidence that children who spend time in nurseries or with child-minders are more likely to develop behavioural problems such as hyperactivity, bad behaviour and could be linked to emotional problems.

Oxford University researchers studied 991 families, where the mother was around thirty years old, and at least one child was aged around three months.

The team then assessed the children at the age of four, with questionnaires about their behaviour and emotions completed by both carers and parents. They also observed the type of care provided by parents and non-parental care for at least 90 minutes for those children placed in formal childcare settings.

The report, published in the journal Child: Care, Health and Development, said that “children who spent more time in group care, mainly nursery care, were more likely to have behavioural problems, particularly hyperactivity. Spending more time in day care centres, over the total period was a predictor of total problem scores”.

The authors concluded: “The findings in relation to childminding suggest that it might be out of home care rather than group care that raises the risk of behavioural difficulties.”

The researchers also tracked other forms of early years care and found that children who spent more time in pre-school playgroups – normally for a few hours a day, rather than a full-time nursery – had fewer problems.

The study states: “These findings suggest that interventions to enhance children’s emotional and behavioural development might best focus on supporting families and augmenting the quality of care in the home.”

In reply, Anand Shukla, of the Family and Childcare Trust, said: “Research shows that children who attend a nursery are better prepared for school and usually have better social skills such as cooperation with peers – skills which are essential to a child’s future happiness and good mental health. Often both parents have to work in order to maintain a family home.”

A Department for Education spokesman said: “We are reforming childcare and increasing high quality provision. Good quality early years education has been shown to have a lasting positive impact on children’s attainment and behaviour, especially those from low income backgrounds.”

Figures from the Department state that 441,000 children under five are regularly cared for in day nurseries while 272,000 are being looked after by childminders.

Children raised in poor families with high levels of parental stress or mental health problems were most at risk of developing emotional problems by the time they started school, it emerged. 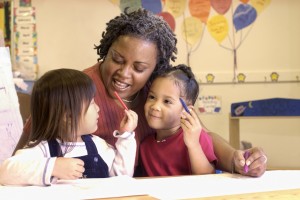