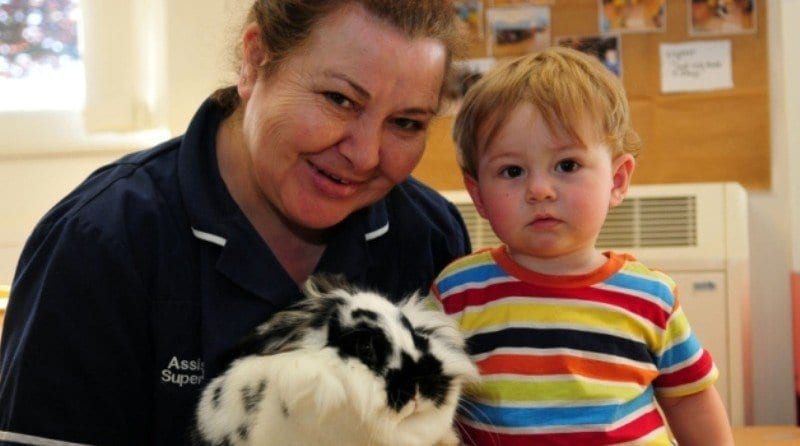 Children at Cherry Tree Nursery had their spirits lifted when a local resident donated a bunny to them after reading how their previous pet had been horrendously tortured and killed by yobs.

The nursery, located in Hartlepool, was left devastated when local yobs broke in,  stole their pet rabbit Sooty, tortured him and left him hanging from a tree. After reading their story, a lady whose son was allergic to their lionhead rabbit, decided to donate the animal to the nursery and the children who attend.

The new addition, Flump, has been renamed Jessie and has settled to his new surroundings wonderfully. Nursery manager Janet Cain has said:

“The children were over the moon when they got it, they were really, really pleased.

“We still haven’t told them what happened to Sooty and we don’t plan on doing so. We have said that he was stolen by some naughty boys because it would be too distressing for them if they knew what really happened.”

She added: “We’re taking no chances with Jessie either. She is an indoor rabbit and we’re going to take her home every weekend.

“We’ve also had the shed all alarmed as well so that hopefully nothing like this ever happens again.”

The plan is to get a second rabbit to keep Jessie company, and they planned to visit an animal farm in Darlington on May 30 to find the perfect match.

Janet said: “The children have all got smiles on their faces now but Sooty is still in our thoughts and we’ve still got his photos.”

The cruel thugs broke into the shed some time overnight on Monday and stole Sooty from his hutch inside it, before torturing and killing him.

They also damaged the door and stole a red push-along bike.

What are your children’s favourite pets? Do their settings have an furry friends for them to play with?