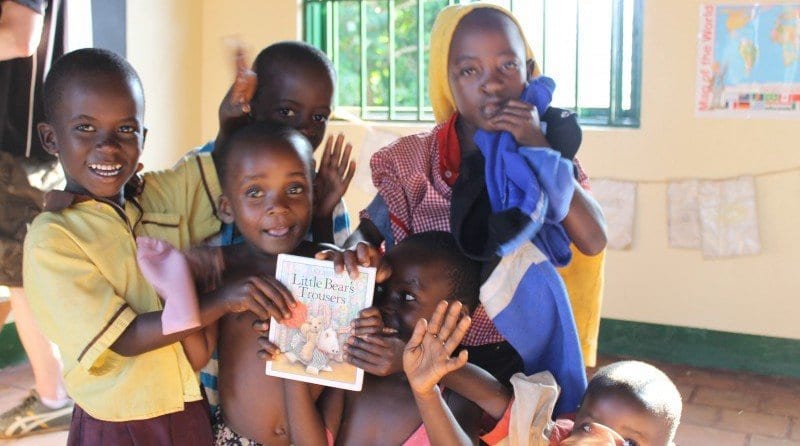 After a great fundraising effort last year, we are delighted to announce that we have finished building our first pre-school for underprivileged children in Uganda!

In late May, five representatives from Parenta Trust set off to Uganda to officially open the pre-school, which, with its three classrooms, will educate 140 children at any one time.

We spent the first few days visiting a range of schools. There were no shortage of heartbreaking stories as we were faced with extreme poverty in a country still struggling to recover from years of oppression, war and widespread genocide.

Truly striking, however, was the number of inspirational people we met, from charity workers and community leaders, to head teachers and children. Despite the pain, they were responsible for bringing a wealth of happiness.

We were excited at the prospect of seeing the pre-school at Good Shepherd in Luwero for the first time. As we drove through the gates, our bus was greeted by 140 pre-school aged children pouring down the hill. Stepping off into the sea of toddlers was overwhelming, as they quickly attached themselves to us. Each one of our group had a child clinging to every finger and more holding onto our shirts and bags. The noise was intense, as they dragged us up the hill to their new pre-school. 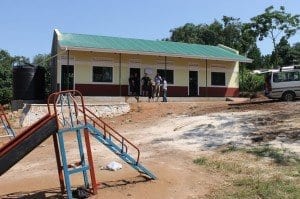 Having been nervous at how the finished facility would look, we were delighted to see that Fields of Life (the charity that delivered the work for us on the ground), had done a fantastic job! The building was beautifully finished, with its bright, fresh paint cheerfully welcoming the children, as if reflecting their smiles.

We were shown the new purpose built latrines before being pulled into the first classroom. The noise was stunning as the children jumped, waved and cheered around us. Difficult as it was, we had to send the children off for a little while so we could put the finishing touches to the rooms.

We spent several hours decorating. We painted rainbows and butterflies on the walls, put up posters, hung bunting and set out the books and toys we’d collected from generous donors in the UK. Our proudest addition was the painting of the tree of life, which was created by bringing in each child one by one, and using their painted hands to form the leaves.

Later in the afternoon, the children, PTA members and some local parents joined us for the opening. Joseph, the head teacher, gave a speech in which he emphasised the importance of education in such a poor community. Then Allan Presland, Managing Director of Parenta Group, who climbed Mount Elgon, Uganda’s highest mountain, last year to raise funds for the pre-school, addressed the villagers to thank them for their hospitality and to give some words of encouragement to the children. 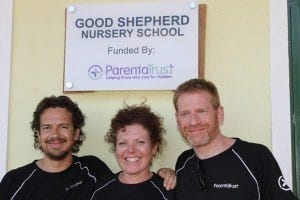 It was a tearful moment as we walked back up to the hill and to unveil the plaque for the official opening; the culmination of so much hard work by people in both Uganda and at home and just the beginning for generations of children who will benefit from formal education.

Allan said, “A relatively small sacrifice for us will have an astounding impact on pre-school aged children. Not only will they be taught important academic subjects, but they’ll learn things that will make them healthier and safer throughout their lives. I’m proud of our achievement and we are already planning on our next nursery in Eastern Africa!”

Joyful as we all were though, it was hard not to be reminded that this was just a drop in the ocean. There are so many more pre-schools needed across the continent and the children all need sponsorship to get their education.

We returned on 4 June, humbled, inspired and ready to build the next one!

Parenta Trust would like to give heartfelt thanks to all those who gave their time and donations to make this project possible.

Wanting to support the Parenta Trust?

You can make a donation to the next pre-school through our Just Giving page!

Parenta Trust was set up in 2013 to help children across the world.

The Parenta Trust is the charitable arm of the Parenta Group of Companies –  providing vocational training and IT support systems to Early Years providers  across the UK.

Good Shepherd Pre-school is in Luwero in central Uganda.

For more information on the Parenta Trust, please visit https://www.parenta.com/charity/