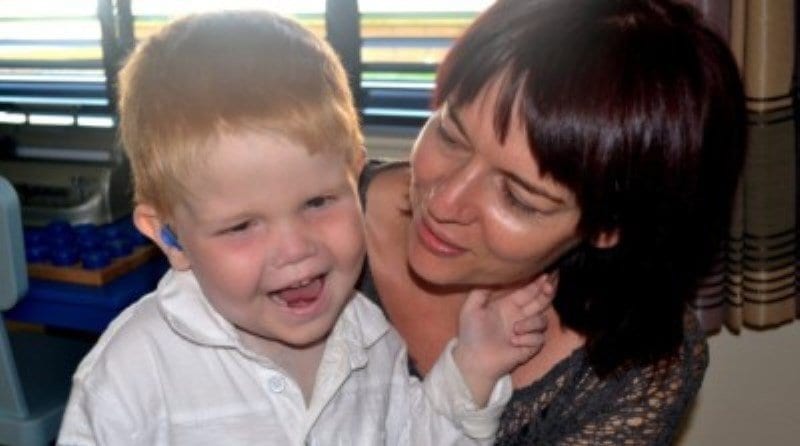 Back in May 2012, 4 children and 2 members of staff contracted E coli at a nursery in Aberdeenshire.

Bo Cox, aged 3, was one of those children and the only one not to make a full recovery.

Bo has been left blind and deaf, and as a result of the fatal bug suffered kidney failure. He has now had most of his bowel removed, receives dialysis 4 times a week and has undergone 19 operations.

He has been a patient at Glasgow’s Yorkhill Children’s Hospital for the past 2 years and is fed through a tube.

His consultant has said that Bo had the worst case of E coli he had seen in a child that had survived. Speaking out for the first time, his mother has said that she feels “bitter and sad” that her son’s life has been destroyed and she has been robbed of a normal motherhood.

The infection had been brought into the nursery by a child who is likely to have come in contact with animal faeces or contaminated water, and unfortunately due to weak infection-control policies at the nursery this spread.

An official report by NHS Grampian and Aberdeenshire council in August 2012 demanded that the nursery made improvements to hand-washing and other hygiene procedures as it was discovered that within the nappy changing room staff had not been cleaning their hands properly.

In July of 2013 the Care Inspectorate reported that the nursery had addressed all infection-control matters to address future situations and they were rated as “good” in all areas.

A spokesman for the Care Inspectorate said the Cox family had suffered a “tragedy”.

He said: “No family should have to go through a tragedy like this.

“It highlights, in a heartbreaking way, the need for every agency to be vigilant and proactive in doing everything possible to prevent infection.”

When speaking of how their lives had been affected and how there had been a lack of recognition to the consequences E coli brings, Ms Cox said:

“Of course there is bitterness and sadness. Bo’s conditions are still life-threatening and, at times, we have been on a knife edge wondering whether he would survive. It has had a really deep effect on us all and it is not something we can get over. It won’t ever get better and it will never be back to how it should be.”

“There has been no mention to how extreme Bo’s illness has been. When the report was written in 2012, he was just coming out of intensive care, but things continued to get worse.”

“We feel so insignificant or that it doesn’t matter, or that people think, ‘It’s not my child so it’s not my problem’.”

Ms Cox moved to Glasgow to be near Bo who will continue to receive treatment at Yorkhill and who she now cares for full time.