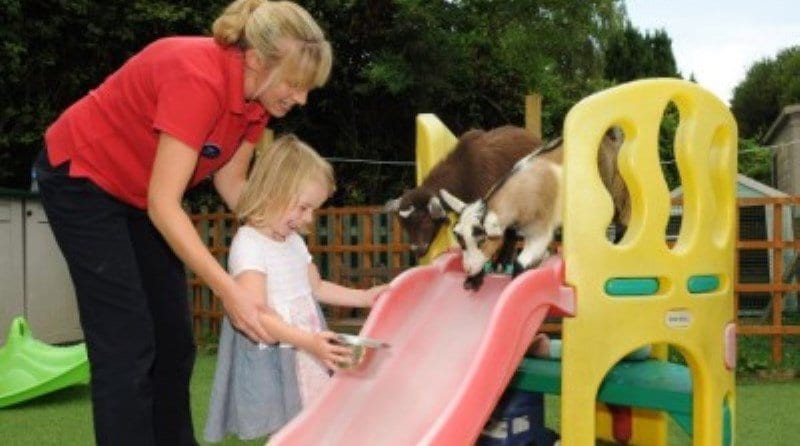 Joe and Charlie are the latest kids to arrive at Swallows Day Nursery in Swimbridge, the pair of Pygmy goats were purchased as part of nursery owner, Elaine Griffin’s 60th Birthday present.

Elaines deputy manager and daughter Holly wanted to get her mum something a little different,

“Mum was going over the top for her 60th birthday with a number of parties planned. We thought we have to up the ante here, hence the goats.”

Joe and Charlie have their own enclosure in the playground of the nursery and have been an instant hit with the children who attend. The hope is that they will also help to teach the children to care for animals.

The children have been helping to clean groom and feed the animals, who are said to be quite the escape artists.

Holly said: “Our new fencing proved ineffective, within an hour they got through.”

“I’ve heard it said that goats are nature’s escape artists but there is a limit.”

The goats have even been tested on an assault course set up by the staff, using chairs to get on top of the tables  and the use of the children’s slide, Charlie struggled but with a few treats made it to the finish line.

With a choice of either Pigmy goats or a micro pig, Joe and Charlie were considered the safer option with Holly saying; “We knew with pygmy goats we could do it properly.”

“They’re registered now and I even have a herd number. I feel like a real farmer.”

How important do you think it is for children to be around animals from a young age?