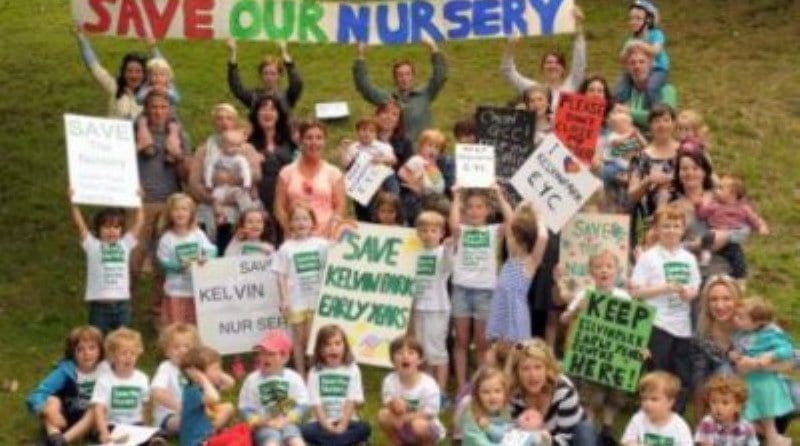 Parents of children who attend the nursery have spoken out about the proposal stating that the issues Hillhead are experiencing with space are temporary and that their nursery should not suffer as a result.

One campaigner has said:
"For children it's about continuity but, also, this would be devastating to the quality of family life as parents can't take their child to a nursery in one place and then a separate primary school.”

"If you have a third child in secondary school then it becomes a kind of joke."

The closing of Kelvin Park would mean moving 120 children to a new setting, and is the only council funded early years centre in this area of Glasgow.

The nursery opened in 2011 alongside the primary school which has seen an influx of admissions taking them to capacity.

To deal with the overcrowding issue, Glasgow City Council has issued a consultation document that proposes a change to the catchment area for Hillhead; the consultation also proposes the closure of the Kelvin Park setting.

The council’s proposed solution to the closure would be distributing staff and children from the setting to 6 different nurseries, some of which have not even been set up.

Only 2 of these proposed new settings offer the same 52 week operating hours that are currently offered at Kelvin Park.

Other than the parents, support  against the closure has also been received from local politicians including the Green's Nina Baker, MSP Hanzala Malik of Labour and SNP councillor Ken Andrew.

Mr Malik said: "It would be a horrible situation if this learning community was scattered to the four winds even on a temporary basis."

Mr Andrew added: "I can only hope that a sensible and pragmatic solution can be found to preserve the nursery while finding the extra accommodation that Hillhead Primary clearly needs."

And Ms Baker said: "As the problem is temporary so the solution should be temporary, namely portable classrooms for a couple of years."

Councillor Stephen Curran, executive member for education and young people, said: "It's important to highlight that at this stage no decision has been taken to close Kelvin Park Early Years Centre.”

"We are undertaking an extended public consultation and Education staff are seeking the views of as many interested parties as possible."

Is parent power enough to stop the closure and distribution of children across numerous settings?  Do you think there is another temporary solution?