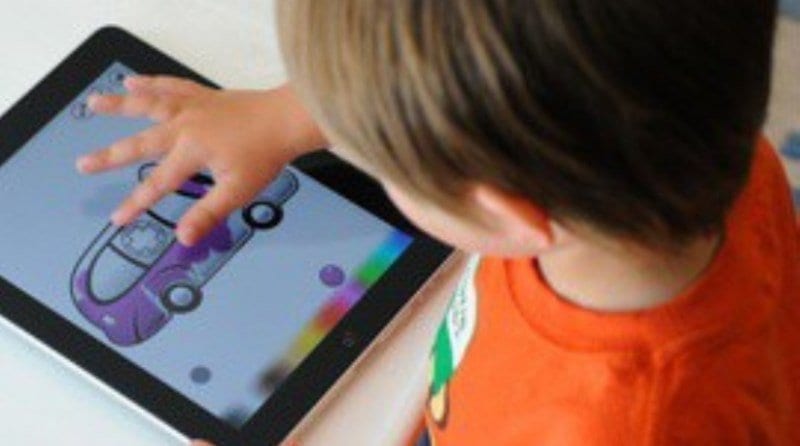 Love it or hate it, technology plays an increasingly large part in modern day life and children are more exposed to it today than in any previous generation.  We’ve all seen harassed parents handing their children Ipads, tablets and mobile phones in an effort to keep them quiet or stop a constant barrage of pleas to play on one. You may even be guilty of this behaviour yourself!

But are we overlooking the beneficial influence that these devices can have in Early Years education and the positive impact it can have on a young child’s development?

In a report published this year by the Literacy Trust, a survey was carried out to ask childcare practitioners about their attitudes to the use of technology in the early years.

The report states that more than 8 of 10 practitioners think that technology is supplemental rather than central to structured activities and free play. The report went on to say 75% of practitioners thought it was important to use technology from an early age and 2 out of 3 would like to increase the use of computer tablets in their setting

Yet, according to the report, the majority of Early Years practitioners use books and non-technology for their daily activities with children.

Some childcare settings, like Asquith Day Nurseries and preschools, have invested millions in digital technology.  Those nurseries that have the financial resources to do so have purchased interactive smartboards and touch-screen computers with the intention of helping their children learn.

Indeed, one of the learning goals in the revised EYFS framework is that children recognise that a range of technology is used in places such as homes and school.

Under “Understanding the World”, it states that children must “identify the uses of everyday technology and use information...and programmable toys to support their learning.”

So, what are the downfalls of using so much technology at any early age?

Some experts would argue that children’s attention spans and levels of concentration seem to be shorter than ever because of over-exposure to electronic devices. Children can develop an “over reliance” to getting screen-based entertainment and the immediate gratification it provides, rather than learning to persevere with an activity.

Former head teacher and author Sue Palmer, thinks that too much early exposure to screen-based technology can be detrimental. She said “I think what children really need up to the age of seven is real life in real space and real time, which means three-dimensional experiences.”

Whatever side of the fence you sit on, it seems that technology can have a positive effect on learning outcomes for young children if used the right way.

An article published by the Telegraph states young children who have access to both touch-screen technology and books at home were “...more likely to enjoy reading and perform in line with national targets for their age than those who could only access books” , following a survey of 1,000 parents with children aged three to five.

Do you think using technology in Early Years does more harm than good?