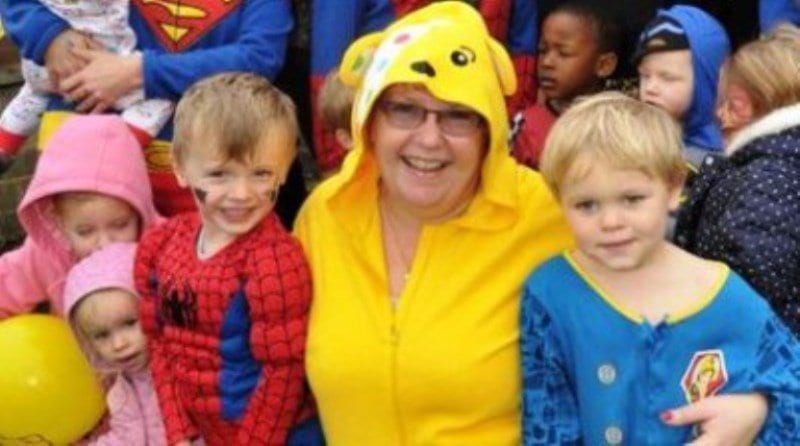 Across the UK on Friday nurseries put on great days for their children in support of Children In Need and here we have shared just a few of their stories.

Jack and Jill Nursery in Ash had their children dress up as superheroes for the day, raising a total of £150 for the cause, they battled against the elements throughout the day.

What started out as a bit of light-hearted fundraising saw the nursery battle against the wind and rain in their costumes, in an effort to get the face of Pudsey bear up on the wall outside the nursery.

"Even though it was raining it didn't ruin it at all.”

"We tried plan A, plan B, and eventually I think it was plan X which worked, but we got it all up there.”

"Everyone had lots of fun - they really enjoyed making the spots and putting them up."

To raise funds, each parent donated £1 to allow their children to dress as their favourite hero.

Little Thetford Acorns Pre-school gave Pudsey a helping hand by spending the day in their pyjamas and onesies.

As well as getting to spend the day in their comfy pj’s the children at the centre also sold Pudsey cakes during collection time to parents with the help of staff members at the setting.

“The children really got involved in the cake stall and loved being in charge of their very own shop. We’ve had a lovely day in our onesies and pyjamas and raised a fantastic amount for Children in Need”

Children and staff at Happylands Day Nursery spent Friday dressed up in their cosy pyjamas, dressing gowns and onsies raising money for Children In Need with a bake sale and a competition to win a teddy bear prize where they had to guess where the bear lived.

Their amazing efforts saw them raise £70 for the charity.

Staff and children at Wellend pre-school had to do their best to look like Pudsey by dressing in spotty clothing.

"To help fundraise for BBC Children in Need the staff and children are all wearing spotty clothes to try and look similar to Pudsey bear.”

“We have lots of fun and games planned such as making spotty cakes, decorating Pudsey pictures, ‘pin the bandage on Pudsey’ and musical spots.”

After all of those fun and games, they welcomed classes from the adjoining primary school to meet Pudsey the Bear himself.

To raise money children who had been collecting their pennies got to put all of their £1 and £2 coins into Pudseys car!

What did your setting get up to for Children In Need?