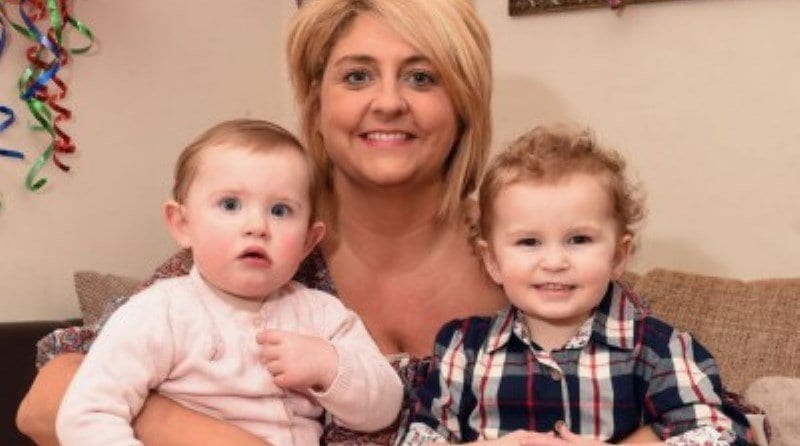 Childminder Elaine Sim from Blantyre, a baby and toddler in her care were just inches away when a skylight fell through the roof of the town centre shopping mall last Monday.

Elaine said her life “flashed before her” as a pane of glass from the roof of East Kilbride Shopping Centre’s Plaza fell in around her whilst she was caring for 2 year old Sofie Reilly and 1 year old Skye Duncan.

The childminder, who has been in business for just over a year, was shopping with the little ones and was going to take them to the soft play area at the centre.

Elaine explained: “I was getting cash from the cashline right beside WH Smith when everything happened.”

“I was about to head over to a buy a piece of jewellery to pay for a gift that I was going to give to my daughter, who was travelling back from Amsterdam after celebrating her 21st birthday.”

“I was planning on then taking the kids to the soft play area within the centre when the pane of glass fell in from the roof.”

“Sofie had dropped a sweet on the ground and she had literally turned round to wander off to get it when I grabbed her and stopped her going any further. We were just inches away from being hit straight on with the pane of glass.”

“We were showered with glass and the kids and I were hysterical. We all got such a fright. We were all crying.”

“All I keep thinking about is I was responsible for those children. What if I had died on my daughter’s 21st birthday? We could have all easily have been seriously hurt or killed.”

Along with the children, Elaine was ushered to safety within WH Smith.

“I checked the children over straight away to make sure they were both ok. I had to pick out glass from Sofie’s hair and Skye had to be taken out of her buggy and the glass had to be hoovered out from it. Luckily none of us were injured. I had a slight cut on my finger but that was all.”

“I had to contact my husband to come away from his work to collect us all as we had travelled to the centre on the bus. There was no way I could go home on my own with the two children. We were all just too upset.”

“I can’t thank Elaine enough for what she did on Monday. She has been looking after Sofie since she was a baby. I was in shock when she told me what happened that day. They had a real lucky escape. I know that she grabbed Sofie away in time. The whole experience has been awful and Sofie has had a few nightmares since it happened. She has been crying in her sleep and shouting out Elaine’s name, we just hope she is young enough to forget about it.”

Melissa, Skye’s mum said: “Luckily Skye and the others were okay. You have just asked why did this happen and in such a busy shopping area?”

Elaine added: “What I can’t believe is that no-one from the centre has been back in touch to even check how we are all doing. It happened on Monday and this is Wednesday and yet they have all our details and not even a phone-call to make sure we are all doing ok or to provide any details of what actually happened.”

After the incident, the area was cordoned off and police officers were on hand to provide assistance.

A spokesman for the shopping centre said: “We can confirm that a pane of safety glass failed in the Plaza Mall on Monday afternoon.”

“There are no reported injuries and our security team immediately cordoned off the area.”

“There have been no issues with the glass in this area previously. The safety of staff and visitors is our highest priority and Centre management is now liaising closely with specialist engineers and health and safety officers to determine the exact cause of the incident.”