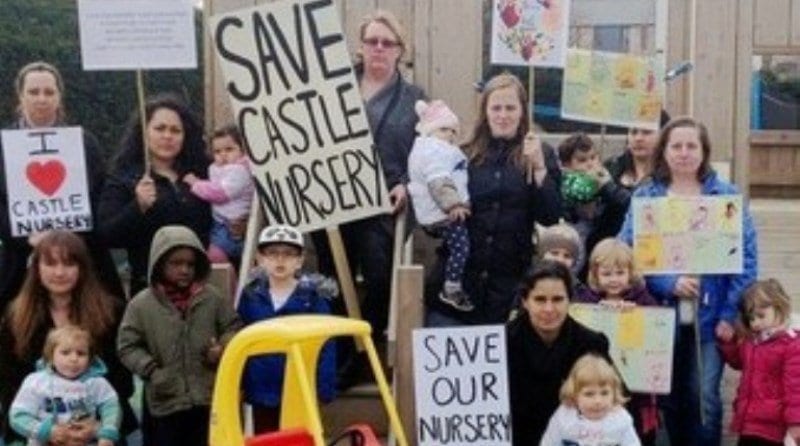 On Friday of last week, angry parents staged a protest to save Castle Nursery School, Derby, in an attempt “to be heard”.

With placards and specially made t-shirts parents, friends and children chanted as they marched from the nursery to Derby City Council House. The authority is consulting on plans to close the nursery in an attempt to save £100,000 despite it being rated as “outstanding”.

The city council has stated that the nursery is under used, but governors and staff from the setting are compiling evidence that challenges this and shows the success of the nursery.

40 people took part in the march, which was organised by Gill Hall who is a helper at the nursery.

"It wasn't far from the nursery to the Council House but it is busy along the Morledge and lots of cars, buses and taxis pipped at us."

The group were hoping to speak with someone from the children’s services department at the city council, but were told that this was not possible.

"We did not expect to actually be seen but we had lots of positive feedback from people. We went in the cafe at the back of the Council House and we got more signatures for our petition, which we are submitting to the council next Friday, and we had some people put their children on the waiting list for the nursery too."

Rachel said: "This nursery is an absolute necessity for the Arboretum ward.”

"The attention of the nursery staff and the extra-curricular activities that are held, which include shows and days out, are just great.”

"I had originally chosen for my son to go to a different nursery. My friend convinced me to come and have a look at Castle Nursery School and I just knew it was the right place for him.”

"Latvian is our first language, so by being here it has helped his English as well as helping him make friends.”

"I am really happy that my son comes here and it would be a real shame if it closed."

A Derby City Council spokesperson said: "In relation to Castle Nursery School, the council is currently consulting on closing the school. A statutory consultation notice was published on March 3, 2015, and the consultation period ends on March 31, 2015.”

"The council, of course, welcomes any comments.”

"Responses to the consultation can be sent to School Organisation and Provision Team, Derby City Council, The Council House, Corporation Street, Derby, DE1 2FS or via e-mail to yourcityyoursay @derby.gov.uk.

"The outcome of the consultation will be reported to council cabinet on April 1, 2015."