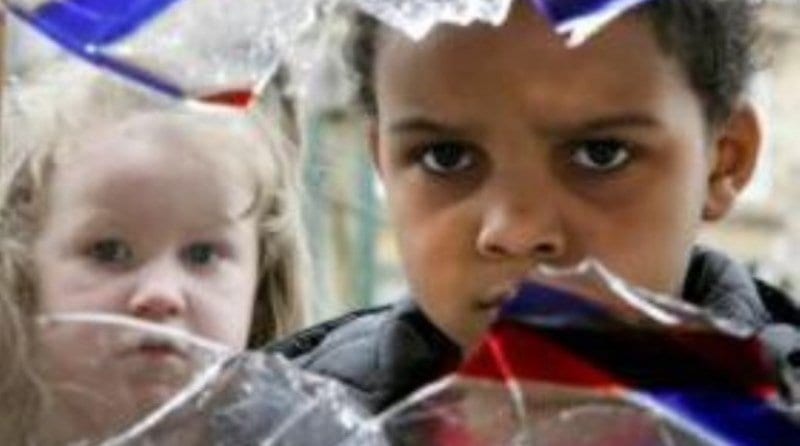 Tots from Whitecraigs Nursery spent 2 years building their inner city garden, only for it to be ruined within a matter of hours.

Working with artists from Glasgow’s Wasp Studios, special stained glass was created for their garden gazebo. This has now been smashed and the setting ransacked in what has been 2 nights of heartbreaking vandalism.

Lesley Morrison, headteacher at the setting, is appealing for help in finding the culprits and preventing further damage.

She said: "This nursery is seen as an asset to the community. For example, we spent time growing Alpine plants on the roofs of our Portacabins so that the flats opposite would have something nice to look down on.”

"We very much felt that the neighbourhood was looking out for us and we have never had any trouble before now, which I have always been very proud of.”

"We hope that they are still looking out for our nursery and will help track down whoever is responsible for this damage."

The temporary site behind Whitehill Secondary School has been their home since 2010, and Mrs Morrison was given £10,000 Awards for All cash to help develop their outdoor learning space.

With Harry Potter a favourite amongst the children, the garden gazebo was turned into Hagrid’s House.  The area was also transformed into a planetarium and a Santa’s post office at Christmas.

Wanting to make it extra special, the nursery was awarded an additional £4,000 from Awards for All and youngsters designed stained glass panels for the structure.

Mrs Morrison added: "Our pupils worked very hard on this. They drew what they wanted their glass panels to look like then four at a time took it in turns to go along to the glass studios to spend half an hour talking with the artists about their designs.”

"It took about two years from start to finish and is very important to the children - now it has been ruined.”

"We also have a garden full of glass bottles from people drinking outdoors."

The outdoor area is now out of bounds until specialists have been out to confirm there is no further glass remaining, instead outdoor classes will be held at secondary school.

Mrs Morrison said: "Summer is fast approaching and, although we are a 52 week nursery, the children move to a different location during the holidays.”

"We're really worried that worse will happen than the vandalism that has already occurred.”

"I'm not sure how people can be so thoughtless. Someone must know who is responsible and we hope they take that information to the police."

Councillor Stephen Curran, executive member for education and young people, also hit out at the vandals. He said: "These people should be ashamed of themselves.”

"The children are devastated and we will not be able to replace this wonderful window the children helped to design.”

"Anyone with any information on these mindless vandals should contact their local police station."

There seems to be a lot more vandalism of childcare settings in the news recently, why do you think our local childcare facilities are being targeted?