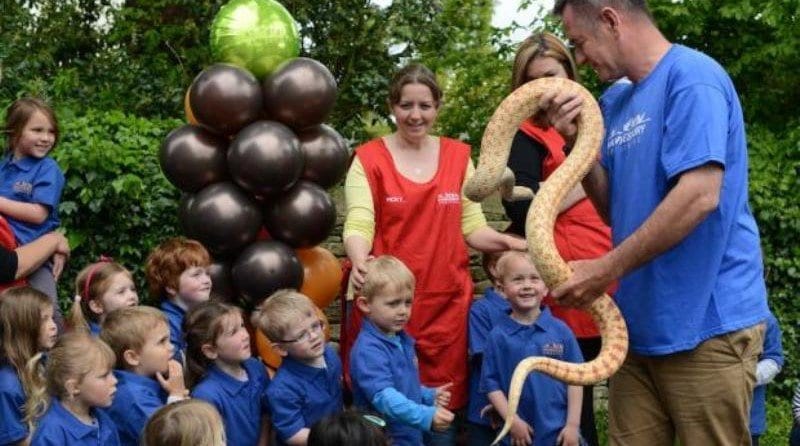 Wildlife TV presenter Nigel Marven was recruited along with some exotic animals to open the new outdoor centre at Hawkesbury Pre-School.

The new £4,000 free flow outdoor space was opened on May 22 by Marven, who also brought along his pets, a North American bullsnake and a blue-tongued skink (a lizard).

At the opening, crowds of residents and staff of the pre-school rallied for the opening at the setting which runs as a non-profit charity.

“The creation of the space has been a real community affair, organised by the committee of volunteer parents, who between them secured the grant and organised the building of it.”

“A local village tradesman – JH Walker – who is based in the village, did the building work, the local Waitrose provided volunteer staff to paint it as part of their ‘Community Matters’ scheme and now we are thrilled that it is complete”.

“The whole community has made a huge effort and there are so many who deserve thanks, who have been part of the project which has allowed the children to now play inside and outside.”

Mr Marven said: “It’s great to see an open space like this.”

“The rarest animal in the wild now seems to be a child nowadays so I am happy to see more is being done to encourage them to go outside and explore and play.”

“It’s important to get this generation interested in the world outside and animals, particularly endangered animals.”

“I brought along the animals to make today a bit more exciting for the children, and I hope the new space is well-used and enjoyed.”

Funding for the new outdoor area came from a New Homes Bonus Grant of £2,950 and a further £1,500 was donated to the setting by South Gloucestershire Community Grant.

Former chairman of South Gloucestershire Council, Howard Gawler, attended the event and said the new space was a ‘fantastic area’.

Continuing, he said: “I do think it’s money well spent, it’s a fantastic area which has undergone a big transformation with lots of attention to detail.”