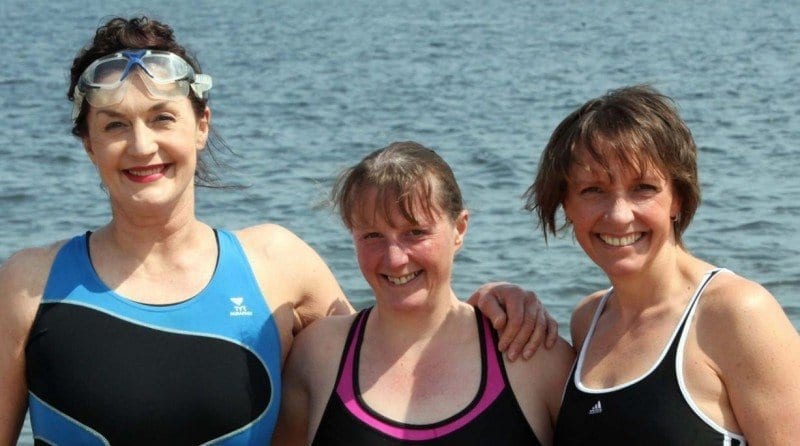 A teacher, health worker and nursery manager have all taken on the phenomenal task of swimming 21 miles across the English Channel.

Liz Orr, 53, Angela Moon, 47, and Tracey Etherington, 45 have all been training off the coast of Sunderland over the past 4 months. All in preparation for the mammoth task which will see them swim from Dover to Calais today, 22 June 2015!

“People think we are crazy.”

“They see us in the North Sea wearing just our swimming costumes on a cold February morning and just shake their heads in disbelief.”

“But this is something we’ve always wanted to do and I’m looking forward to tomorrow, although I’m definitely a little nervous.”

The swim will start with Tracey, from Gateshead, diving into the Sea at Samphire Hoe Beach in Dover; she will swim for an hour while Liz and Angela sail alongside her in a swimmers boat. Liz will then take over before Angela follows.

They hope that they will be able to complete the swim in around 15 hours, depending  on the weather. With rules stating they are only allowed to wear a swimming costume, cap and goggles, this will be no easy task!

Sisters Angela, a swimming teacher at Newcastle’s Royal Grammar School, and Tracey, a nursery manager, have said of the challenge:

“We needed to have an aim and a reason to complete this challenge and decided to raise funds for Alzheimer’s Society.”

“Our dad is suffering with dementia and Liz has also had family deal with dementia, so we agreed this would be a very worthwhile cause close to our hearts.”

“Dad has suffered for four years with Lewy Body Dementia and Parkinson’s. He has carers who visit four times a day to take care of his needs. Dad is unable to move physically so they feed him, clean him, give him his medication and most important give him some company while we are at work.”

“We have never considered putting him in a home. Our mum died in childbirth and left him with four children, all under the age of four, back in 1971 and he devoted himself to us.”

Although preparing well for the task, they say there are some concerns:

“Jellyfish,” said Liz. “Apparently there will be a few along the way but we’ve been told not to worry too much. At least we shouldn’t bump into any sharks, to be honest, I’m more worried about the boats and ships in the water.”

The group of friends met 10 years ago at a swim in Windermere; with their latest challenge they hoped to raise £3,000 for the Alzheimer’s Society but have surpassed this and are now aiming for £4,000.