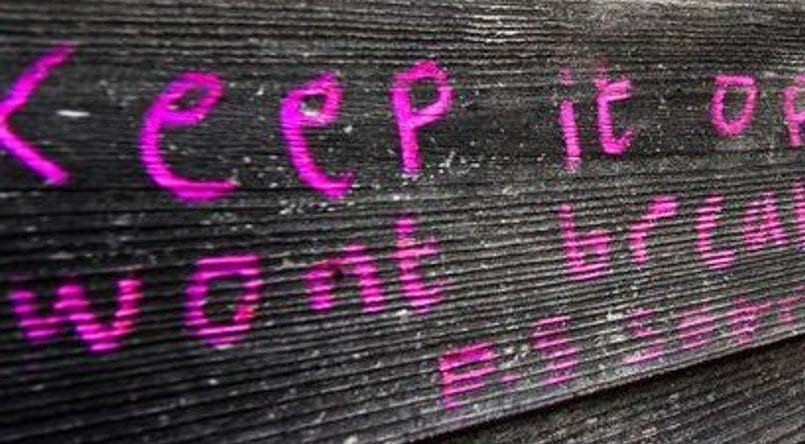 Children at Alexandra Nursery School and Day Care Centre in Bolton were tired of burglars breaking all of their toys and their storage shed, so they penned a sign asking them to stop.

The vandals, however, left a sarcastic reply to the heart-wrenching plea.

Sitting down to make the sign with workers at the nursery, the children wrote:

“You should take care of our things. I cry when our toys are broken. Play nice in our garden.”

The children were left disappointed when vandals responded, telling the staff at the nursery not to lock the shed, as that’s why they have to break it open.

Their full reply read: “Keep it open then we won’t break it. Promise. Sorry.”

Police have confirmed they are investigating the incident, and have vowed to catch the culprits.

Barbara Kenny, head teacher at the nursery, says so far the damage has cost them £600.

She said: “The staff put up a poster with the message ‘please don’t break our shed’ and ‘I cry when our toys are broken’.

“On Monday we have had a note chalked next to it saying ‘keep it open then we won’t break it’.

“It’s really cheeky, but I suppose we have a dialogue with the thieves now.”

Vandals make their way into the hidden garden, sometimes taking small chairs from the shed to sit. In bad weather, they have also been known to throw the contents of the shed outside to seek shelter.

Mrs Kenny said the garage door has also been damaged, and branches pulled from the climbing tree. They have also discovered scorch marks on the wooden outdoor play equipment, which they believe were caused by vandals attempting to start a fire.

Mrs Kenny said: “We haven’t found any alcohol bottles or needles but we think that’s what they are doing.

“It’s been going on for months. It eased off over the summer but we had builders in and all the scaffolding and fencing seemed to put the vandals off a bit.

“We must be going on for £500 or £600 worth of repairs and it’s money out of our budget that should we should be spending on the children.

“I’m worried about the fact it is escalating and that they could set fire to the shed.

“It’s just mindless damage and we’re just getting fed up.

“We just want to highlight to the community that this happened and hopefully shame the vandals into stopping.”

With no money to install CCTV, local police have said they do not have the resources to patrol the area around the clock.

The vandals are thought to be local teenagers and residents have spoken out about persistent problems involving teens.

One resident, retired Gerald Harte, 73, said: “They are obviously up to no good and bored kids. I’m not sure if they are doing anything illegal but it is intimidating.”