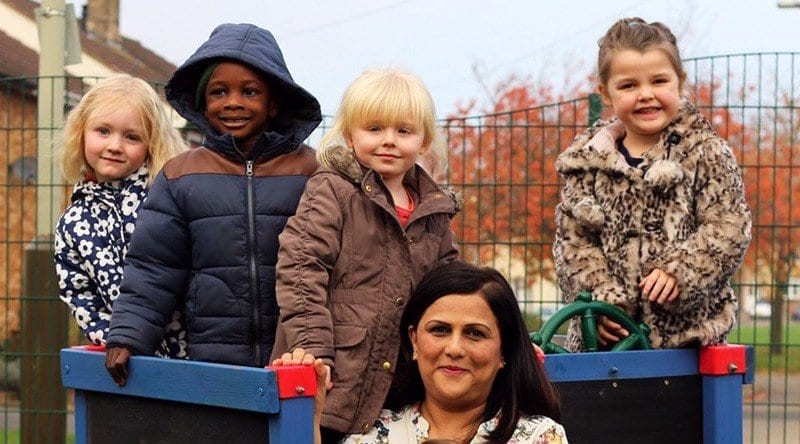 Nursery manager Kim Arrowsmith has received an MBE and managing director of Kiddycare Nurseries Kala Patel is listed for an OBE.

Manager of member nursery Matchbox Day Nursery in the London Borough of Tower Hamlets, Kim Arrowsmith receives an MBE for services to children and families.

Kim began her career in childcare in 1988 after helping out at her children’s playgroup. She set up Matchbox Day Nursery, a registered charity, as part of the Neighbourhood Nursery Initiative in 2003.

She said: “We have a playgroup which runs alongside the nursery a couple of crèches’ which support the courses in the community centre.

“The team here is fantastic and most of our staff have been here since we opened. This award is a team effort.

“I was really surprised when I found out about the MBE. I am hoping the weather is better by the time I go to the Palace so I can wear a nice frock.”

Kim plans to take her husband Colin to receive the award.

Kala Patel, who receives an OBE for services to the childcare business, founded the first of her five nurseries in Leicester in 1984 when she was a 22-year-old mother. She had only lived in England for six years, having moved from Kenya.

With just a bank loan and Enterprise Allowance of £65 a week, she converted unused office space into a 15-place nursery. Within days, it was full and she had a growing waiting list. Just months later, Kala moved her first nursery into much larger, better equipped premises.

Since then, Kiddycare has grown to five settings, providing childcare for under-fives and after-school and holiday care for older children. Her aim has been constant: to support the predominantly Asian communities her business serves by meeting local needs and employing local people. It was this, coupled with her entrepreneurial skills, that led to her winning her first award, the Midas Entrepreneurship Award.

Kala said: “I never expected to be awarded an OBE. It is really wonderful to be recognised for all the work I’ve done over the years with the children. This honour is about that commitment and I’m blown away by it. But I have to say, none of this could have happened without the support of my tremendously dedicated team, who always give their all.”

Chief Executive of NDNA Purnima Tanuku OBE said: “We are delighted and very proud that our member nursery managers have been recognised in this way.”