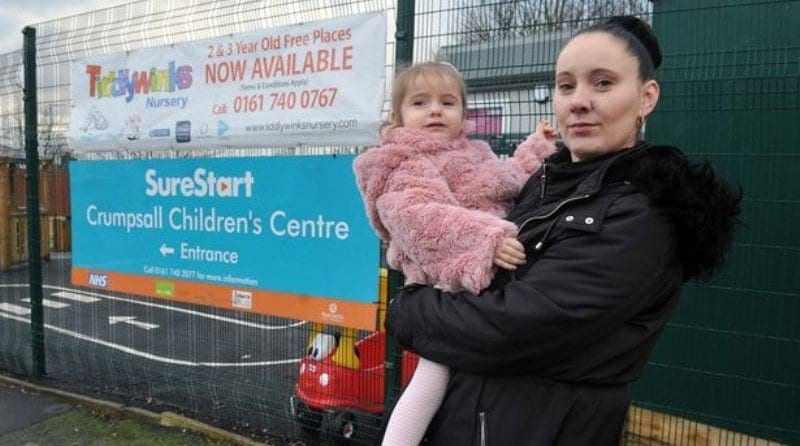 A mother has spoken out about her terror after discovering her two-year-old daughter had escaped her nursery and had been found wandering the streets alone nearby.

Kelly Casey had gone to pick up her daughter, Casey-Mae, from Tiddlywinks Day Nursery in Crumpsall, but when she arrived she discovered her child had gone missing. Within seconds of her finding this out, a member of the public arrived back with Casey-Mae after finding her wandering the streets just a few minutes away.

Ms Casey said, “The nursery is at the top of a hill, she was found at the bottom - about two minutes away. She wasn’t even wearing a coat, just a dress. The nursery didn’t even say a lot at the time - I don’t think they had a clue what had really happened. When I got home, I rang up and demanded a meeting with the manager. I’ve also contacted Ofsted. The nursery only apologised after I pushed them.”

She added, “They let her go. They say she probably tailgated another parent, which is irrelevant. She got out because of a lack of attention from the staff.

“Thank goodness someone found her. I’ve pulled her out of the nursery. I don’t feel like she’s safe. It was a really busy time of day, with loads of cars around on the school run. The nursery has accepted responsibility, and hopefully it won’t happen again. But Casey-Mae could have been run over, or taken by somebody.”

A spokesperson for the nursery has said, “All parents have been informed. Following the incident we immediately informed our local authority’s designated officers who are investigating along with Ofsted, and we are working closely with both groups.

“We have conducted our own internal investigation and have initiated disciplinary proceedings against the members of staff concerned.

“The safety of our children is our number one priority, reflected in our latest ‘outstanding’ rating from Ofsted. We have since reviewed our systems for entering and exiting the newly built separate sessional care modular building to ensure this cannot happen again.”