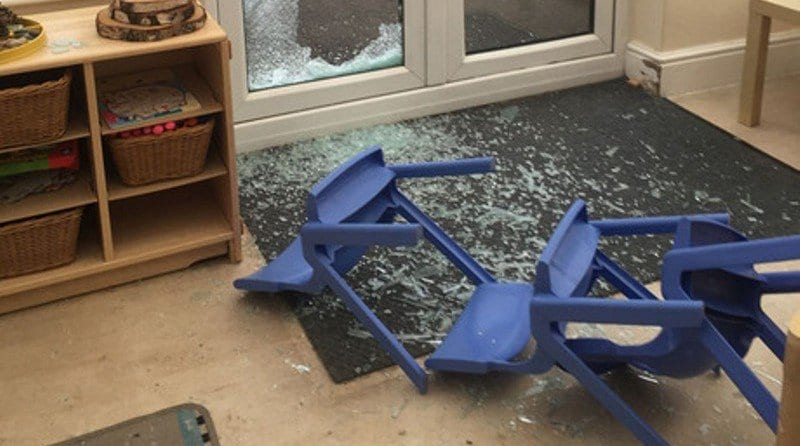 Local and early years communities have rallied around a nursery group in Southampton after it was targeted 6 times by callous thieves.

The group, which runs 8 nurseries and an out-of-school club, has been left shocked after 2 of its nurseries were broken into twice and 3 were targeted on the same night in February.

David Wright, who owns the group, said:  “In each case, they broke down the front or back door, broke into the locked offices and damaged the premises significantly. Out of the offices they took cash, tablets and even print cartridges… It is clear they were targeting Paint Pots in particular. Though the police cannot be sure if it’s a vendetta or they simply locked onto our name. One other nursery from a different group has been targeted in the same period.

“Two of our settings, Burgess Road and Howard Road, were targeted twice which was awful.

“And when they hit Waterloo Road Nursery they took it to another level.

“At Waterloo Road the intruders urinated in the baby and toddler rooms before turning up the heating to ensure the maximum damage and smell.

“Obviously it is very distressing for everybody involved, staff, parents, the community. It’s upset everyone who’s heard about it, because it’s so destructive. After eight days, you wake up everyday wondering what has happened last night, entirely focused on that mentally, and dealing with what follows; the clean up, the repairs, the insurance, the police. We haven’t had any incident for a week so hopefully this is the end of it, but obviously we just don’t know.”

Mr Wright added, “My wife Anna has said, ‘They have broken our doors but they can’t break our spirit,’ and that sums it up for me. The resolve of staff and parents is what has kept us going. It is a very emotional experience as the nurseries are like a second home to our children and staff. Some staff now don’t want to open up on their own anymore, understandably, for fear of what they might find.

“As far as support has gone, the donations, messages of goodwill, people volunteering to come help us clear up, has been extraordinary.”

As of 26 February, donations from supporters totalled more than £1,000.

Police are currently appealing for more information to try and find the culprits.