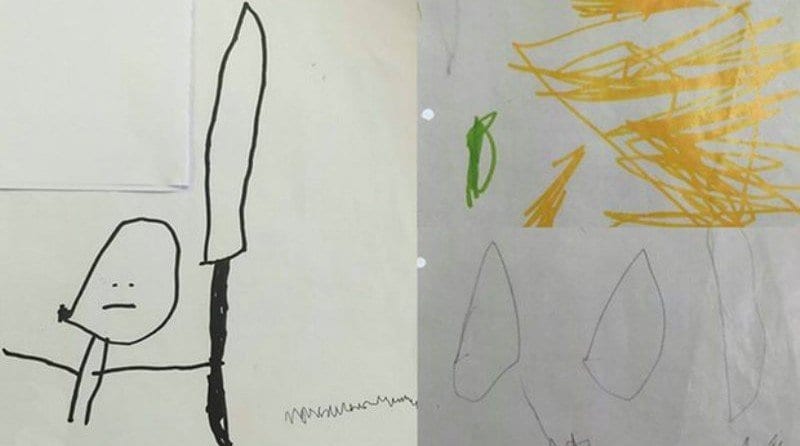 Nursery staff threatened to refer a four-year-old boy to a de-radicalisation programme after seeing a picture he drew, according to the child’s mother.

Staff believed the drawing showed the child’s father making an improvised explosive device called a cooker bomb. However, the drawing was actually of the child’s father cutting a cucumber with a knife.  Staff misheard the child when he referred to it as a ‘cucker-bum’ – something which his mother later proved (see below) was how he said ‘cucumber.’

When concerns were raised by the staff at the nursery, the boy’s mother feared she would lose her child after being told: “Your children might not be taken off you…you can prove yourself innocent.”

She said the whole experience had left her shaken and upset.

A spokesperson from the nursery has said that no referral to Channel was made, adding: “Under the statutory guidance, as reflected by our own safeguarding policies, early years providers are required to record, and if necessary, report – any incidences they feel may warrant further attention or discussion.”

Luton Council has also stated that they advised the nursery not to make a Channel referral.

The child’s mother said she is disappointed that no apology has been made, especially after the way she was made to feel over the ordeal. She eventually contacted community activists and was put in touch with a solicitor who helped her.

“Initially, I was so upset and distraught that I told him not to do any more drawings … God bless him, he said: ‘I won’t draw anything … I’ll just draw a house or the remote control’. And I said: ‘Don’t draw the remote!’” she reports.

The child’s mother has said this particular incident raises questions about the referral of 19 children last year to Prevent’s Channel initiative.

Are institutions taking the idea of radicalism too far? Or is there reasonable cause to make such accusations?