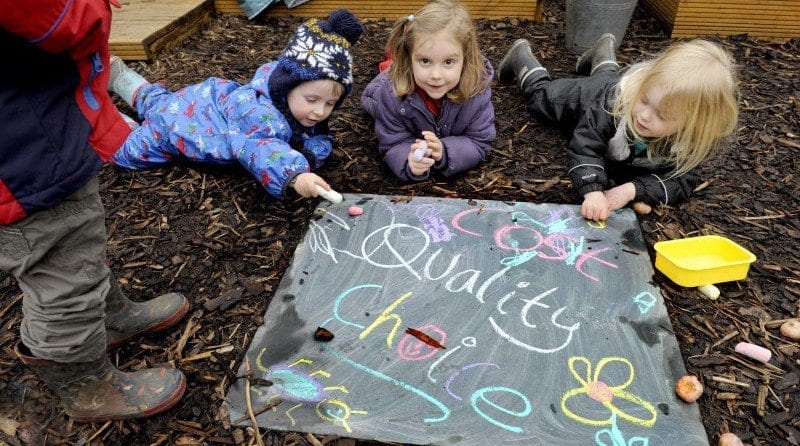 Nurseries in Scotland have to absorb the biggest funding shortfall in the UK which unless addressed threatens to limit their ability to offer more free childcare hours, according to a survey by National Day Nurseries Association (NDNA).

Currently private and third sector nurseries make up a significant part of the early learning and childcare landscape in Scotland, with 86% of nurseries delivering free places for three and four-year-olds.

Parties across the political spectrum have plans to extend this free childcare offer to parents, including the SNP planning to increase funded hours from 600 to 1140 per year by 2020. However, due to chronic underfunding and rising business costs, half the respondent nurseries said they were unlikely or unsure they would offer additional free hours.

Nurseries are paid an average of £3.56 per hour by local authorities for a free place for three and four-year-olds, but this falls short of their costs by £1,128 per child per year. The average nursery offering 35 places has to absorb losses of £39,480 every year.

Launching the survey and NDNA Scotland’s Childcare Challenge to the next Government, Chief Executive Purnima Tanuku OBE, said: “This enormous shortfall is a huge burden on private and third sector nurseries.

“They have no choice but to try to absorb these costs themselves or pass them onto parents by increasing fees for additional hours or for younger children.

“Their main concern is that if free early learning and childcare is expanded, far fewer parents will need any additional hours, so they will struggle to make up this shortfall, especially with the National Living Wage being introduced next month.

“The vast majority of nurseries are small businesses and can’t afford these losses. They want to offer parents these free hours, but at the same time they have to be sustainable. Almost half of the nurseries who responded expected only to break even, with 11% expecting a loss.

“This is why fewer feel confident in offering more funded hours to support the next Scottish Government in fulfilling free childcare pledges.

“Private and third sector nurseries offer flexible, high quality provision. It’s vital that all types of early learning and childcare are allowed to play a full role in delivering funded hours so parents don’t miss out. The new Government must work with the sector to get the funding right and make sure all the money reaches nurseries. Nursery owners are keen to support families and make free childcare a success for everyone, but need to know their costs will be covered.”

According to the survey, only half of respondent nurseries would be likely to extend their funded hours and 22% are unlikely or very unlikely to increase the amount of funded places they offer.

This in turn would further restrict parental choice of provider. Many private nurseries already have waiting lists for the funded hours and some are having the number of free places they can offer capped by local authorities.

“Underfunding means that the private sector is unable to match pay and conditions in the public sector, so nurseries are losing qualified practitioners to schools and maintained nurseries.

“We would ask the next Government to ensure all childcare providers are able to offer funded hours on a level footing and give true choice to parents.

“NDNA today launches a Childcare Challenge to the next Government, outlining our manifesto for change. We are calling on everyone to make their vote count and really think about the options on May 5.”