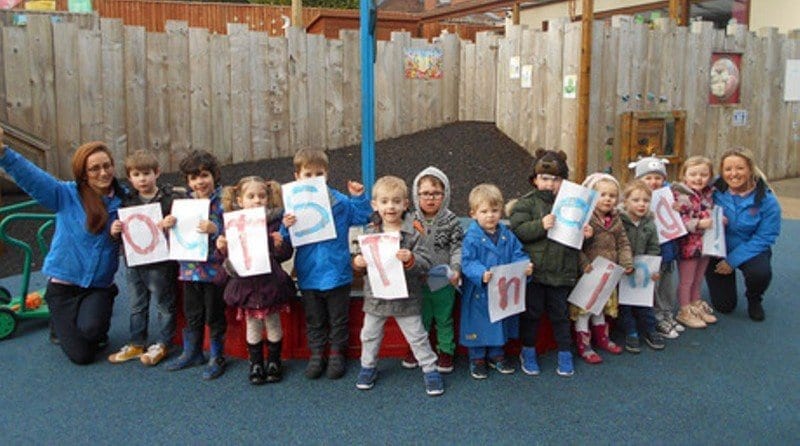 The Mulburry Bush Nursery chain is celebrating after four of its settings were given outstanding grades by Ofsted in the space of 5 weeks. The most recent addition to the chain – a nursery in Dumers Lane – only opened in September last year.

The family-owned business, based in Greater Manchester, credits its winning formula to making the well-being of their children the number one priority and employing staff who have a loving approach to childcare.

The Mulberry Bush Tottington nursery was the first to be opened by John and Sue Robinson, back in September 1990. Following an inspection of this setting on 6 January, the report said:

‘Teaching is consistently outstanding. Children are exceptionally well prepared for their next steps in learning. Their progress is monitored meticulously, so that any emerging gaps in learning can be addressed at the earliest opportunity.’

A second inspection took place shortly afterwards on 15 January, for their setting in Whitefield. The inspector said:

‘Key persons are exceptionally skilled and sensitive and help babies and children to successfully form strong emotional attachments and feel very secure within the nursery. They have a superb knowledge and understanding of the children that they care for, which has an extremely positive impact on their physical and emotional wellbeing.’

The nursery on Dumers Lane was inspected two weeks later and Ofsted noted how the setting’s partnership working with parents created consistency for the children.

The Mulberry Bush Nursery in Walmersley was inspected on 10 February. In the report from inspector Jennifer Kennaugh, it said:

‘Babies are provided with a wealth of activities from when they are able to stand, which help them to develop the manipulative skills and strength needed to use simple tools. There is a very strong emphasis on developing babies’ and children’s communication skills from their earliest attendance, which underpins their very rapid progress in other areas of learning.’

The fifth nursery in the chain, located in Walshaw, gained its outstanding grade in December 2013.