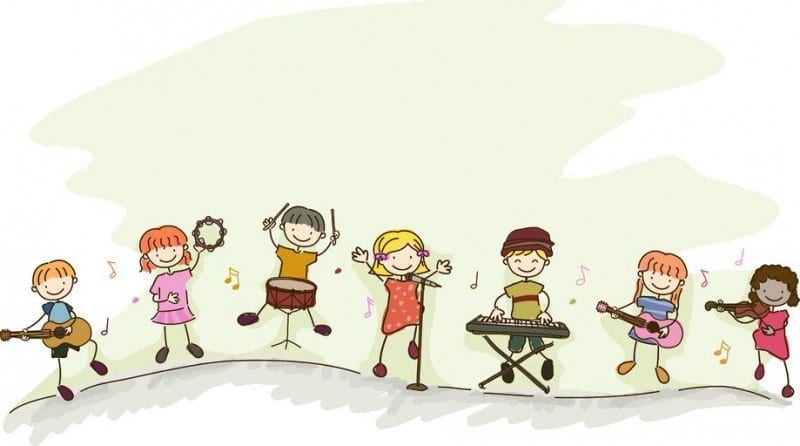 The ears start forming when a foetus is only 3 weeks old and by 25 weeks are fully functional and capable of creating memory circuits as they continue to hear familiar sounds, such as their parents’ voices. The sense of sound continues to develop until a baby is about 6 months old when a baby can detect where a sound comes from and by 1 year can recognise and join in many favourite songs and rhymes, as well as distinguish between a number of sounds.

The biggest role of sound is to help learn language and recognise intonations of language and emotion. A study in 2009 found that babies’ cries are different as a result of the different tones used in different languages, for instance a French baby’s cry will have a rising melody and a German baby a lower contour of melody (Birget Mampe, et al., Current Biology, Dec 2009).

Sounds are made when materials vibrate; the shaking movements in the air create the sound – fast vibrations create higher sounds and slower vibrations low sound. Hard materials can reflect sound, thus creating an echo and sound can be amplified where the air pressure is denser. Try experimenting with these facts – a balloon full of air held against the ear will amplify a gentle sound such as tapping to appear louder, this is because the air molecules are closer together in the balloon making it a better conductor of sound waves. The sound of a group of children will seem louder in a room, such as a school hall, because the sound waves are able to bounce off the walls and floors back to you, whereas in a classroom the carpet and furniture will absorb some of the sound.

The brain is capable of shutting out sounds; this process of adaptation relates to all of your senses, the brain looks for new stimulus and will be alerted to them. Constant and familiar sounds, such as the background noise in a restaurant or classroom can be tuned out, this is why the brain can shut out noise when you’re sleeping, it is only an unfamiliar noise that will wake you.

It can be really exciting to get the children to be quiet, close their eyes and concentrate on what they can hear. I love doing this experiment outside where the various sounds of nature that can often get drowned out are so rewarding.

Ears convert sound waves into nerve impulses that are sent to the brain, the ears pick up the sounds but the brain does the hard work to make sense of it all. A study in 2014 found the neural connections in the brain that manage vision and hearing work together to support each sense and that by minimising a person’s sight for as a little as a week can help improve the brains ability to process hearing (Hey-Kyoung Lee & Patrick Kanould, Neurin Journal, 2014).

A great deal of fun can be had by focussing on the sense of hearing – use music games, guess what’s in the shakers, create a junk band, use scoops in sensory tubs of rice, pasta, stones and more or just sit and listen as part of a mindfulness session.

Sound is a key element in our ability to communicate and make memories, even before birth; we should stop for a minute and try to hear something our brain may usually shut out, today!

Lisa Lane launched Sensory Scenes in 2014 with the aim to provide themed bags of fun for play, exploring and learning. With three boys of her own, she is passionate about children being able to manipulate, explore and use their imagination. Sensory Scenes’ themed bags are perfect for individual play, sensory tray play and themed subject planning.