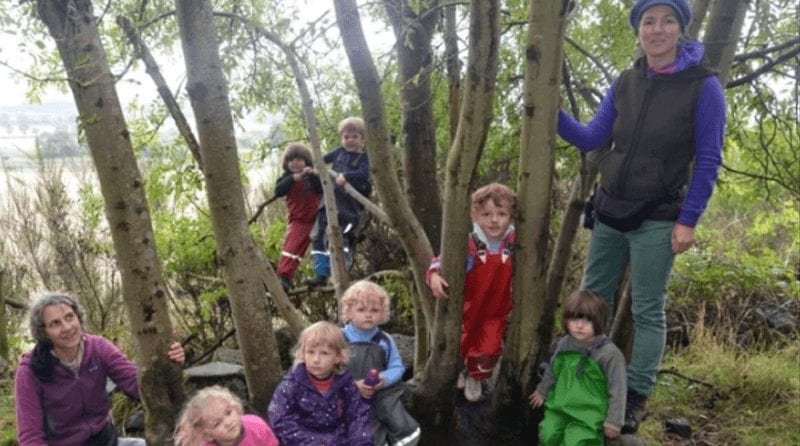 The Secret Garden Outdoor Nursery in Fife, which teaches psychological resilience, has made it into Tatler magazine as one of the best pre-school establishments in the UK for 2016.

The nursery, which charges £38.50 per day, is the only Scottish nursery to have made the list which also features Prince George’s Westacre Montessori School.

The magazine describes the nursery as the “ultimate” in outdoor learning. Set on 25 acres of woodland, youngsters start off their day gathering in the local park before a half mile walk up a hill sees them arriving at their setting.

During their day, they get to enjoy a vast variety of activities, including free play, exploring, climbing and role play. Older children are encouraged to mentor their younger counterparts on how to build things, or simply enjoying their surroundings.

Founder Cathy Bache, a former drama teacher, has said that at the setting they teach the children in their care emotional strength and psychological resistance by challenging them to cope with different conditions and activities other children their age are unlikely to encounter.

A maximum of 18 children, cared for by 3 experienced staff members, have the choice of 8 locations throughout the woodland area, using a yurt for mealtimes, building fires for warmth and sheltering under tarpaulin when the weather takes a turn for the worst.

Founded in 2008, Bache has said of the inclusion in Tatler that she was “quite astonished Tatler discovered us”.

“But then I thought to myself that this was a wonderful opportunity to share what we’re doing,” she said.

“I always felt very strongly children should be outside as they would be if they were living in the country.”

By attending the setting, the children- aged 3 and up- are given personal freedom helping them to develop their mental strength.

“The children can be out in the rain all day and learn they can survive that. So often adults have a negative view of bad weather, which I think has a negative impact on mental health. So we have songs for when it rains and this helps develop fantastic physical and psychological resilience.”

On mother, Tansy Torkington, whose son Finlay attends the nursery, said: “Finlay went up the hill on his first day a little child and came down a boy. His body language was different and he had lots more confidence.

“When he first started the nursery he was frightened of steep slopes and heights but his key worker worked on that and being outdoors gave him the chance to work on it.”