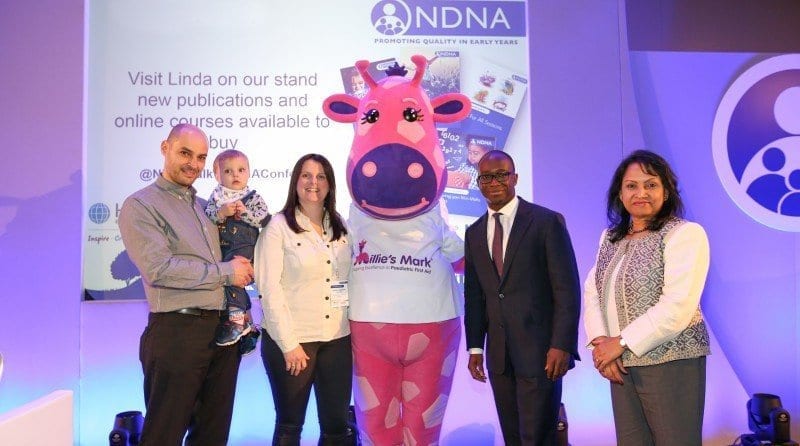 Childcare Minister Sam Gyimah officially launched Millie’s Mark, a new standard for nurseries where all employees are trained in paediatric first aid and have thorough processes in place to keep children safe.

He made the announcement today (Friday 1 July) in a keynote speech at National Day Nurseries Association’s Nursery Conference 2016 in Milton Keynes.

NDNA has been working with the Department for Education and with support from Dan and Joanne Thompson in an advisory capacity, to develop and pilot the scheme.

Mr and Mrs Thompson founded Millie’s Trust after their daughter, Millie, died after choking on food at a nursery in Stockport in 2012.

As part of the changes, Childcare Minister Sam Gyimah announced that nurseries where 100% of staff hold paediatric first aid qualifications and have well-deployed first aid processes should receive a special endorsement, Millie’s Mark.

The Millie’s Mark standard will involve providing evidence of exemplary practices as well as proof that all staff working with children hold paediatric first aid qualifications. Millie’s Mark is open to all nurseries and a dedicated website will be launched later this summer.

Joanne Thompson said: “Millie’s Mark is a direct outcome of our campaign as parents, for parents. Following the loss of our darling daughter Millie, we strive to encourage nurseries to be exemplary in paediatric first aid practice and we are looking forward to seeing the first Millie’s Mark being awarded later in the year.”

NDNA Chief Executive, Purnima Tanuku OBE, said: “We are delighted to have been successful in our bid to develop and deliver Millie’s Mark.  We believe passionately that it will make a difference in keeping children safe.

“Millie’s Mark will soon be well-known to parents all over the country as a clear indicator of the highest standards in keeping children safe from harm.

“Seeing that a nursery has achieved Millie’s Mark will help parents make informed decisions when they are choosing childcare and it will be great for nurseries to show how serious they are about providing the best services possible.”

Ms Tanuku continued: “Our workforce survey demonstrated that 72% of nursery workers within NDNA member nurseries hold a paediatric first aid qualification, which far exceeds that which is required by law.

“Millie’s Mark will help nurseries to validate quality and reflect on their current practice as well as providing best practice guidance to support them to increase competencies and confidence of practitioners in applying paediatric first aid.”

Delivering Millie’s Mark will build on the work that NDNA carried out last year in working with nurseries to produce a series of case studies of exemplary practice in first aid training in England.

A total of 10 nurseries, chosen from more than 200 applicants, have been taking part in a pilot to thoroughly test the new standards that settings will be required to demonstrate. These nurseries will be the first to receive Millie’s Mark.

For more information, and to register your interest, go to www.ndna.org.uk/milliesmark or email info@milliesmark.com