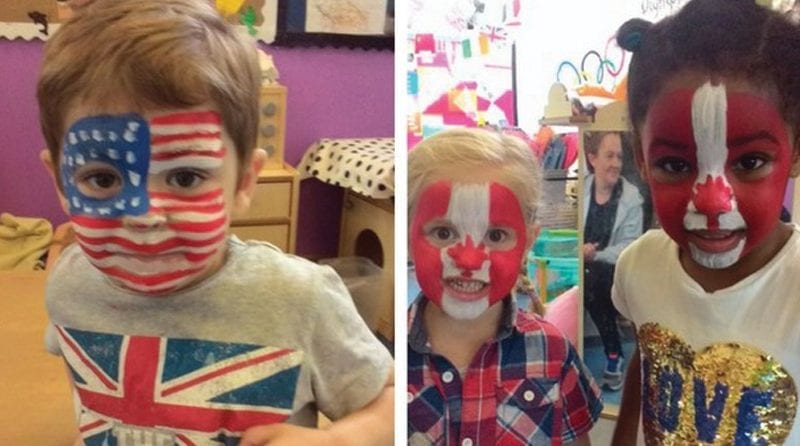 Fennies children’s nurseries have 8 settings across South East England, 3 of which are located in Croydon.

To celebrate the Olympics in Rio, children at these settings have been taking part in a number of activities, with each nursery adopting a different country to support.

Fennies of Addiscombe Road adopted Jamaica as their country, with manager Vikky Rose saying: “Several members of our staff and children are of Jamaican origin.

“To celebrate their heritage and learn more about their culture we’ve adopted Jamaica as our country.

“We’ve already held a Jamaica-themed opening ceremony and the children enjoyed dressing up in the colours of the country’s flag and making torches and shakers in preparation for our opening ceremony parade around the garden.”

They even held a Rio carnival with Jamaican twist to celebrate the festivities of the Olympics.

“Our aim is to help the children celebrate and learn more about a variety of cultures during the Olympic Games this August. It’s also an opportunity to get them up and active and understand the importance of staying fit and healthy not just now but throughout their lives,” said Mrs Rose.

This is just one of the ways the Fennies settings have been celebrating. Beech House in Sanderstead adopted Brazil and have been competing in mini events including, javelin, long jump, as well as bike races.

Manager of Beech House, Sacha Derrick revealed: “The children have had such a lovely time and have really been getting into the Olympic spirit.

“It’s helping their development in lots of ways, especially learning about different countries and other cultures and making sure they’re getting lots of healthy exercise.”

At the setting based in St Augustine’s Avenue, a garden party was held, where they danced to carnival music wearing Rio-themed carnival hats. Each room at this setting was given a different country to celebrate the games.

Samantha Plant, deputy manager at this branch, said: “The children have been enjoying the Olympics, looking at where our own families are from to link into the countries involved.

“We have created our very own St Augustine’s game in pre-school representing different countries to see who would win. Our babies have been collecting the flags and looking at all the colours.

“We have also used our tablets to watch some of the games so that the children could fully understand and get involved.”

What events have you held to celebrate the Olympic Games over the last 2 weeks?