Nursery closes due to financial reasons 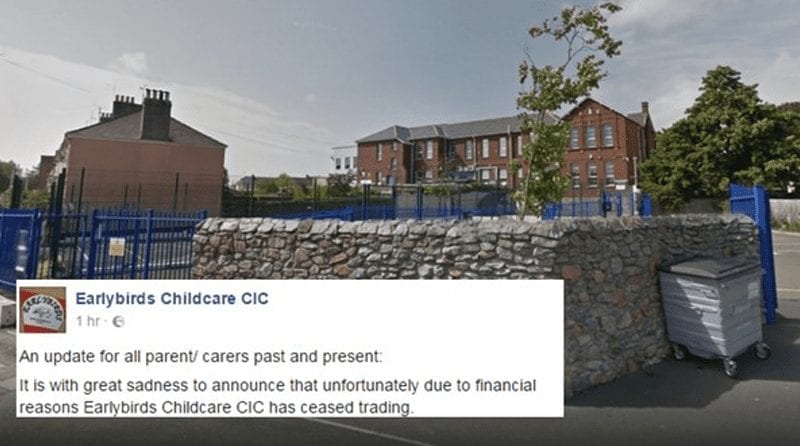 In a statement released by the setting, they stated the closure was ‘due to financial reasons’. They added:

“It is with great sadness to announce that unfortunately Earlybirds Childcare CIC has ceased trading.

“For all those present parent/ carers whose children’s learning will have been documented in a learning journey, these are ready to collect from Tamar Folk Children Centres main reception desk from Monday onwards.

“These are being stored in a locked room to respect confidentiality and you will only be able to collect your own individual child’s documents. Elaine and Krystal are the key contacts who can support you in receiving these.”

The setting thanked families for their support over the years, saying:

“We would like to take this opportunity to say how much we loved working at Earlybirds and supporting families within the local community.

“We are very sad to not have had that chance to say goodbye formally, but promise you that we remained dedicated to the nursery and the community right up until the final moments we received the bad news yesterday afternoon.

“We wish all the children and families that accessed the centre all the best for the future. Much love and thanks for everyone’s support over the years, Laura, Claire, The Bluebell Ladies, The Lilac Ladies and the Rainbow Ladies.”

The statement was released on Facebook, where they asked people to share the message so all those affected would be reached.

News of the closure has been met with great sadness from staff and parents alike.

Member of staff Jo Bettey said: “All the staff put 100 per cent into the nursery and it’s been a great pleasure to of been able to look after all the amazing children past and present.”

Tic Wells, a parent whose child attended the setting, said: “So sad! Won’t find another childcare setting the same! Thank you for all your hard work! My daughter is going to miss you guys!!”

Another parent, Rob Nelsen, wrote: “My children were looked after so well at Earlybirds. Karyn and Paul were top notch and all the staff were amazing, the care provided is the reason my children were so advanced going into school. Cannot thank you all enough, very sad news.”