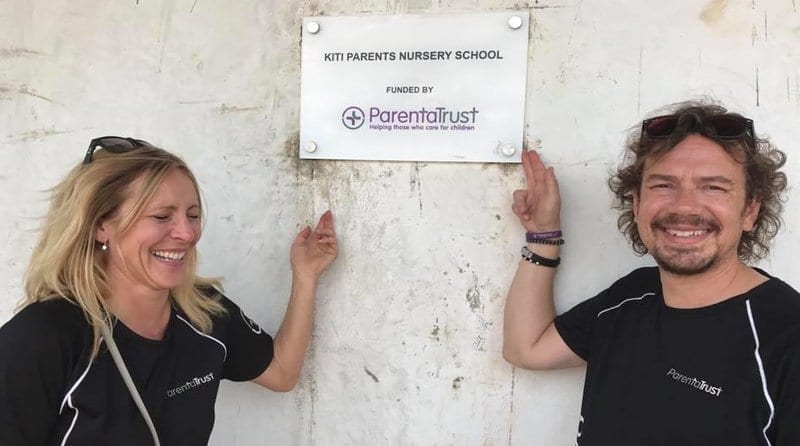 Last week, a group of 7 people representing the Parenta Trust witnessed the official opening of the charity’s third and fourth pre-schools in Uganda.

When both schools are at full capacity, they will be able to provide nursery education for 300 youngsters. Both schools were built by partner charity Fields of Life and funded entirely through money raised by the Parenta Trust.

The opening of Nyakabale Nursery School in the Kasese district was attended by prestigious guests, including the Bishop of Uganda and the local MP. A plaque was unveiled which dedicated the school in memory of Marlene Cameron, who is the late mother of Debbie Cameron – Head of Fundraising at Fields of Life.

The fourth school, Kiti Parents Nursery School, was similarly dedicated in memory of Moira Hawkins – the late mother of Parenta Trust trustee, Amanda Presland. This school is the largest within Parenta Trust’s portfolio, with 3 classrooms and 2 office rooms, and is located in the Wakiso district of Uganda, just north of the capital Kampala.

The completion of the two new nurseries takes the total number of schools built by the Trust to 4, in a time span of just 3 years.

The Parenta Trust is now laying down plans to commission their fifth nursery, which will be built in Karamoja (north eastern Uganda).  The fifth school will be partnered with a local primary school to ensure that children have a smooth transition from nursery to primary education.

Allan Presland, CEO of Parenta and a founder of the charity, said:

“It was truly humbling to open our two schools last week. The fact that we were able to dedicate both schools to the memory of the mothers of two of our trustees made the events even more special.

“The welcome we received at both schools with local dignitaries as well as the school staff and all the children was quite incredible. It included singing in English from both groups of pre-school children. Given that English is their second language, their ability was astounding.

“We now look forward to raising funds for our fifth school in Karamoja which we expect to be completed in late 2017.”

If you would like to find out more about the Parenta Trust, sponsor a child in a Parenta Trust school or pledge your support to the charity in another way, please visit Parenta Trust website.