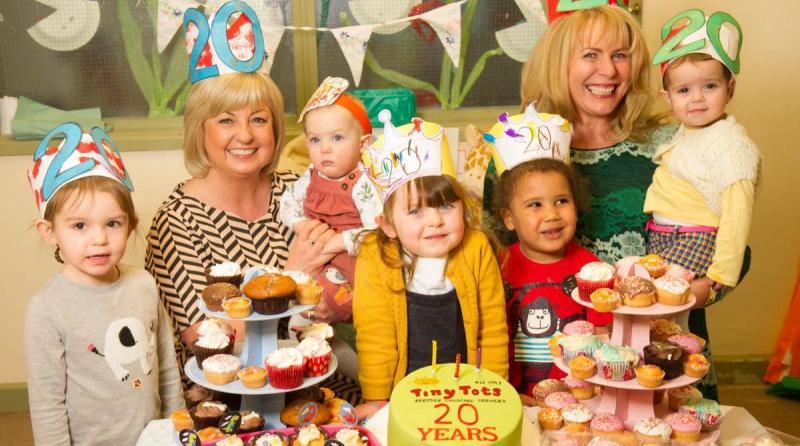 Tiny Tots nursery has celebrated being open for 20 years, marking the special occasion by holding a fundraising party for charity.

When the setting originally opened in Malpas Road in Newport in 1997, they only had two members of staff and one child. Now, they also have a nursery in Clytha Square in Newport.

Mrs Williams, director of Tiny Tots, said: “It means the world to us to celebrate this milestone, we have put everything into the business, we’ve had our ups and downs but now we have 35 members, some who have been with us over 10 years. The staff still has so much passion and the children keep in touch with us, the first ever child that came to the nursery is now at university.”

To celebrate 20 years of being open, the setting held a fundraiser for a child who used to attend the nursery. Frayser Bennett, who is six, was diagnosed in July 2015 with chronic uveitis, which is a swelling in the eye. She is currently under the care of Bristol Eye Hospital.

The nursery decided to hold fundraising activities to raise money for the charity Olivia’s Vision, on behalf of Frayser. The charity was set up in 2010 and provides information and advice to anyone who suffers with or wants to know more about uveitis.

The fundraising events included a teddy bears’ picnic where the children made hats, and had sandwiches and cake. There will also be events in the half term, which include pottery painting, storytelling and crafts.

Mrs Williams said, “If someone is hurting it is nice for us all to pull together and give something back, this business is run with passion, we have been having fun activity days in the nursery, while raising money for Frayser.”

So far, the nursery has raised £230 for Olivia’s Vision and is continuing to raise as much money as possible. More information can be found at tinytots.biz