Fire breaks out at Cheltenham nursery 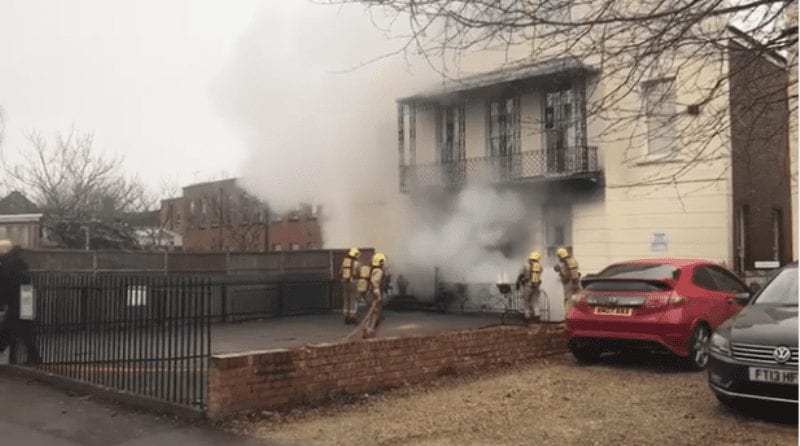 A fire which broke out on Sunday morning at Elephant Moon Day Nursery in the centre of Cheltenham is currently being treated as a deliberate act.

Police are looking for a homeless man who was seen sleeping in the stairwell and are also looking at CCTV footage to try and trace the person who was spotted near the building.

No one was in the building at the time, but there is said to be minor damage to the facade, door and window of the basement area.

Firefighters were called at 8am on 12th March to find flames rising from the basement of the building. Three fire crews brought the fire swiftly under control.

Station manager Russell Parker, who was in charge of the scene for the fire service, believes that the fire may have been started by a homeless person sleeping there who may have been smoking or lit a small fire to keep warm and then fled the scene.

An eye witness has said: “The fire took hold pretty quickly, you could see the fire through the railings, its lucky that no one was hurt and it was on a day where no children where there.”

Another witness, who lives next to the nursery, said:

“I heard alarms going off but that was not unusual for the area. I heard a bit of a commotion. I looked out of the window and saw some smoke but not actually any flames. If there was someone sleeping down there, I can see why it would be attractive, but it wasn’t particularly cold last night. It does seem a bit odd that they would start a fire.”

Gemma Baker, who works at Elephant Moon, said: “The fire was external and the damage was on the outside of the basement, nothing inside the building has been damaged. We’ve been clearing up all day and are ready to welcome everyone back on Monday morning.”

Anyone with information on the incident is asked to call Gloucestershire police on 101.