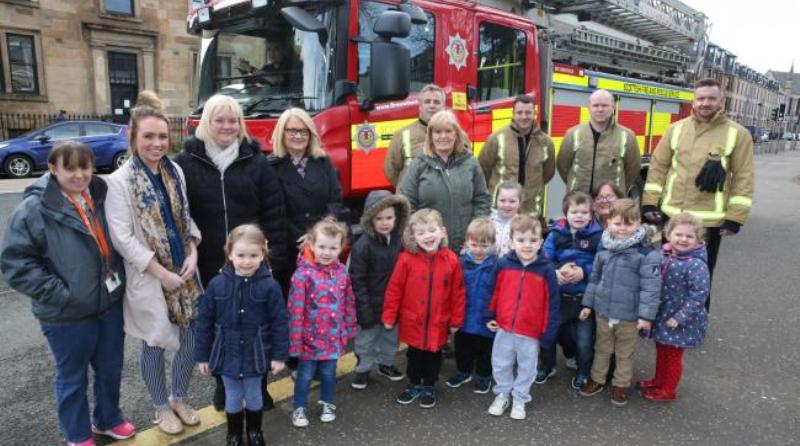 Greencock Nursery, based at West College Scotland, have joined the campaign to support a fireman who was injured after a wall collapsed on him during a blaze last year.

Joined by colleagues from Greencock fire station, children and staff from the setting took part in sponsored walks around the college every day last week to help support the fireman, Andy Adams, in his rehabilitation.

The incident left Andy with no feeling in his chest and he continues to work on his rehabilitation. Nursery practitioner, Jacqui Templeton, explained the reasons they joined the campaign, stating:

“My father was a fireman, so our family were well aware of the dangers faced by the fire service.

“The boyfriend of one of the nursery nurses is a retained fireman, and that also spurred us to do something to help Andy’s fund.

“Most of the kids are aware of what we’re doing on the sponsored walks for the fireman who was hurt.

“They are keen to raise money for Andy.

“Anyone who wants to donate is welcome to pop into the nursery with their contribution.”

Murray Forbes, Watch Manager of the fire station Andy works at, has expressed his appreciation and explained how grateful his colleagues are for the support received from the general public. He added: “I know Andy is very grateful to everyone for their support.”

Andy himself faces the task of relearning skills such as how to eat drink and swallow, and has expressed his gratitude by saying:

“I want to thank everyone for their support — my family and my colleagues, and people from all over the country. It has given me the motivation to keep going.”

The Fire Brigade Union raised an astounding £25,000 after a lottery drive and fundraising evening, with the total appeal standing at £46,242 to help Andy get back on his feet.

Donations can be made at https://www.justgiving.com/crowdfunding/Andy-Adamsfund