In the aftermath of the attack at the Houses of Parliament in Westminster, it seems more relevant than ever to revisit what British values are and how to promote them in a meaningful context for young children.

Contrary to what some people may think, embedding British values in the learning environment has nothing to do with union jack waving or displaying posters of British icons. In fact, when applied to the classroom, British values relate to promoting democracy, the rule of law, individual liberty and mutual respect and tolerance of those with different faiths and beliefs.

It’s been more than 2 years since the Department for Education introduced its advice Promoting fundamental British values as part of SMSC in schools, however some educators are still struggling to understand what these values represent and how best to support them in the classroom.

We’ve given some basic examples below of how you can fulfil this responsibility in your setting. 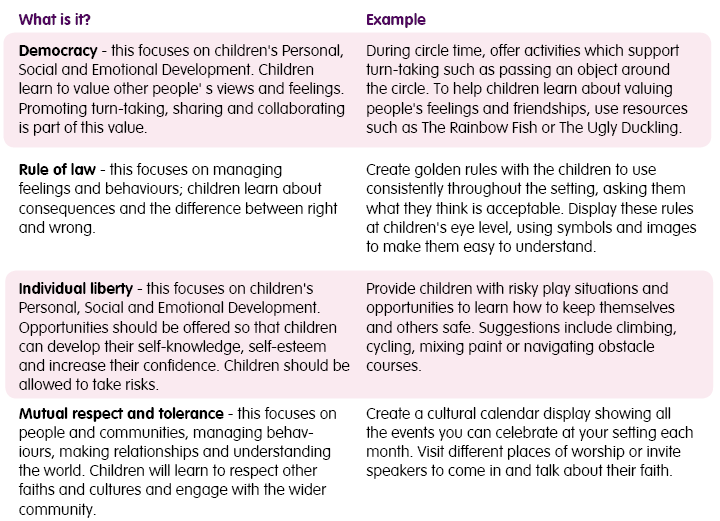 Zoe Harris, head teacher at Elmwood Infant and Nursery School in Croydon, said: “For us, British values is about respecting and celebrating everyone’s differences and uniqueness while understanding we’re all part of the same community.”

This school is non-traditional in the way it has decided to promote BV as it is following the UNICEF Rights Respecting Schools Award.  This award aims to develop pupils’ acceptance of difference and diversity, as well as creating learning environments where children are respected, their talents are nurtured and they are able to thrive. Thus, it ties in very naturally with embedding British values in the classroom.

Ms Harris explains: “The award is a good link to British values because you can talk about the values but keep the language simple – such as the right to feel safe, right to education, right to relax and play –so that it is meaningful for the children.”

To support rule of law, classrooms at Elmwood have a charter which outlines the responsibilities of everyone in class and around the school. For nursery classrooms, this charter has simplified language stating that staff have a duty to keep children safe and that children have the right to privacy whilst using the toilet.

To promote democracy, EYFS and KS1 children fill in pupil surveys which ask them how involved they are with their learning and how happy and safe they feel at the school. These responses are then analysed to identify where further development is needed.

For mutual respect and tolerance, each week 2 children are nominated for demonstrating positive behaviour linked to these values. They are recognised in a “Golden Assembly” and also invited to enjoy tea with the head teacher.

During circle and assembly time, staff and children discuss issues where groups of people may not have the individual liberty or safety that they enjoy.  Year 2 children have watched Newsround and discussed difficult subjects such as the terror attacks in Paris.

The sticking point with promoting British values in a classroom is that their practical application is open to debate.  However, as an educator, it can be helpful to ask:

Whilst examples of how to fulfil the DfE’s requirements can be given over and over, it’s down to your own setting to interpret and apply a personal approach to promoting BV in your classrooms. The questions above should serve as a useful starting point to help inform the way you promote British values throughout your setting.