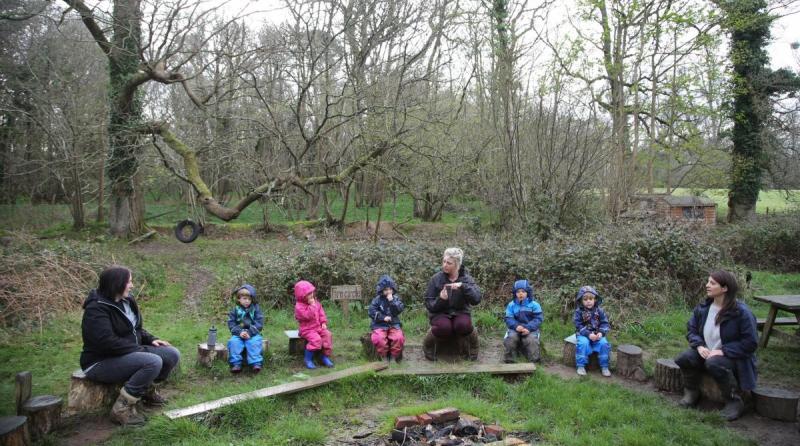 Elves and Fairies Outdoor Nursery is entirely outside, has no running water, flushing toilets or electricity, but it has gained an ‘outstanding’ from Ofsted. The nursery runs in the grounds of Edmondsham House, near Wimborne in Dorset.

There has been a divide between parents about the setting’s unusual approach to childcare, but Ofsted described it as “inspirational” and recognised how the staff “offer exceptional support and challenge in everything the children do”.

The children who attend the nursery spend most of their time outdoors and only go inside to a nearby village hall if the weather is seen as “dangerous, like a strong gale”.

Most of the children, aged between two and three, wear weatherproof clothing like wellies, waterproof clothing and hats. The staff firmly believe that “there is no such thing as bad weather, only the wrong clothing.”

Each morning they push a trolley full of essentials to the nursery setting, the children sing songs around a campfire, wallow in a mud pit and chop vegetables for lunch. On clear days, the children will be outside all day, even for naps.

Babies sometimes attend with parents or grandparents, but the majority of the children that attend are in the toddler group or kindergarten.  The nursery caters for children up to the age of seven, some of whom are home- schooled or go to Waldorf Kindergarten.

The children are taught how to grow their own herbs and vegetables, and they chop them themselves before cooking them on camp fires. They also learn many more creative activities like weaving and bread making.

There are no formal literacy or numeracy lessons, but the children learn through play.

Ofsted said that the children were “highly motivated by the exciting range of challenging learning experiences, they show high levels of concentration and perseverance to achieve goals and show confidence in joining in with discussion.”

Kirsteen Freer, the nursery owner, has said how being outdoors gives children the chance to experience wildlife and appreciate their surroundings. She also said how many children are out of touch with the natural world as they are mainly inside, surrounded by technology. They are unable to experience the changing seasons and the different kinds of weather Britain has, unless they spend long periods outside.

An open day at the nursery is being held on Sunday 7 May 2017, from 11am until 3pm. More information is available at elves-farieswoodlandnursery.co.uk or call Kirsteen on 01725 517807.