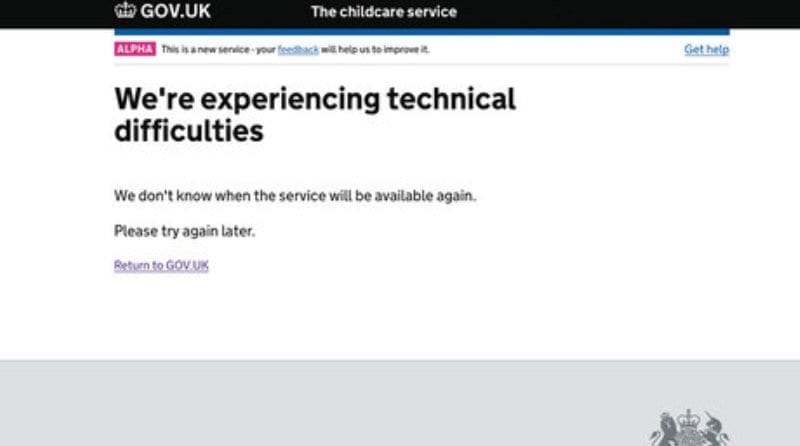 Only two weeks into its launch, parents and providers are having trouble with the scheme.

Many providers have reported they were not able to sign up to the Tax-Free Childcare scheme because they either did not receive a temporary password from HMRC, or the one they were given doesn’t work.

There have been concerns from the Childcare Voucher Providers Association that parents wanting to use the TFC (Tax-Free Childcare) will be left out, as only a third of providers in the UK have signed up to the scheme.

Elouisa Chowne, manager of Goring Little Fishes Pre-school in West Sussex, wrote on Facebook how: “I have no UTR as we are a charity. I’ve rang four times and they’ve said they will send it through. Still nothing. I have working families who will use this and asked about it. Completely frustrating.”

Another provider in London, Tina Alder, said she was still waiting after being sent an incorrect password months ago.

Others have been unable to sign up to the scheme because of glitches in the website, because it is still in an early version. On 9th May, a notification was sent saying there will be ‘planned technical updates’ and the service ‘will be temporarily unavailable.’ However, the next day the website was still down with the messages ‘we’re experiencing technical difficulties’ and ‘we don’t know when the service will be available again.’

Some of the providers that have successfully signed up are still waiting for payment, despite the parents transferring the money through a digital system.

Ali Hart, a childminder in West Sussex, commented on Facebook on the 9th May saying: “They [HMRC] can’t tell me when I will get my money. This will be the only parent that pays me via the Government. I’m not accepting other payments [through Tax-Free Childcare] until all the problems are solved.”

Parents are also reported to have had difficulties with the website; including long delays to accounts being approved and not being able to access accounts.

A parent who went through the trial scheme and whose workplace doesn’t offer vouchers said that only 1 out of 3 payments made to her nursery went through without a problem.

She added on Facebook that: “I was asked to be part of the trial in January and have had no end of problems with it. Last month, the Government didn’t add the top-up so I had to pay my nursery [by other means] or face a fine. I called the helpline and [logged] the issue – an error on their side. I called again yesterday for an update, but they had no record of my previous call. It’s a shambles. I’m so fed up of it. Don’t even think it’s worth the stress and phone calls.”

A spokesperson for the HMRC said: “The childcare service is a new digital service. New or redesigned digital services are regularly launched on GOV.UK and are continually tested and improved. We urgently investigate any issues encountered by parents or providers as soon as these are brought to our attention.”