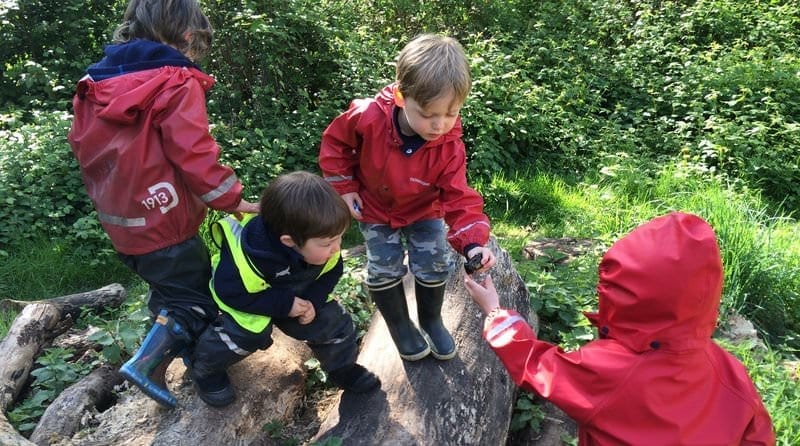 Little Forest Folk is London’s first full time outdoor nursery for 2-5 year olds, offering childcare from 8am to 6pm. They are one of a growing number of nurseries in the UK where children learn through engaging in outdoor play, in all weathers, all year round.

Following the Scandinavian ‘forest school’ model developed in the 1950s, Little Forest Folk’s owners Leanna Barrett and her husband, James, remortgaged their home to start the nursery in 2015. At the time, they had just 10 children on roll in their setting – which is situated in a former paddock alongside Wimbledon Common.

The company has since grown and expanded to other London boroughs including Barnes, Chiswick, Fulham and Wandsworth. Even Sir David Attenborough is a fan of their nursery, sending Leanna and James a letter of praise for their efforts in helping children get closer to the natural world.

The children at Little Forest Folk wear brightly coloured waterproof clothing, colour co-ordinated by age group. This makes them visible at all times to practitioners. However, children are free to mix with different age ranges rather than being segregated. The setting has an adult to child ratio of one adult for each four children (rather than the 1:8 in standard nursery ratios) and headcounts take place regularly. 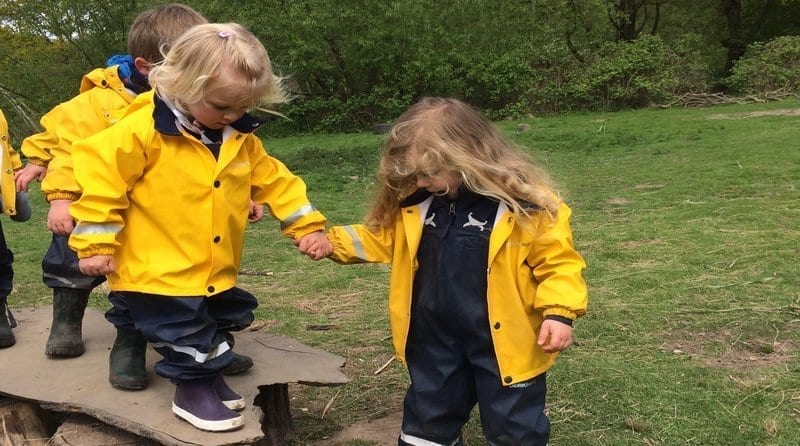 Every morning, the children work with the adults to set boundaries for their play in that area. This empowers the children to be involved in taking care of themselves and ensures they understand the rules which keep them safe.

Being in a forest environment, when it comes to nap time children snuggle down in sleeping bags on inflatable sleeping mats inside a sleeping tent. There is a nappy changing tent to accommodate children in nappies and, for toilet trained children, the setting has natural camping ‘forest’ toilets with handwashing facilities.

Just like any other early years setting, Little Forest Folk follows the EYFS curriculum. Their ethos is to promote education which child-led and play-based, with the aim that the children foster a desire for deeper understanding of the world around them, arising from a sense of wonder.  Numbers and counting are encouraged by looking at trees and birds. Shapes and colours are aided by leaves and feathers. Exposure to the natural world and physical activity are the bread and butter of the children’s learning.

To reduce the amount of paperwork the setting must process and for efficiency, observations about the children and photos of their activities are captured using EYFS tracker software and emailed to parents. Similarly, practitioners keep track of children’s meal times, nap times and nappy changes using an online daily dairy which is emailed out to parents at the end of each day.

The aim of Little Forest Folk is to offer current and future generations of children the opportunity to enjoy the wonderful outdoors in their childhood, an experience which many toddlers in the London area miss out on.

James Barrett said: “We started Little Forest Folk because we were so concerned with the increasing disconnect between children in London and the natural world.

“It just didn’t make sense that there are so many wonderful green spaces in London but no little people climbing trees or playing in the leaves. The more we learnt, the more we realised that kids just aren’t getting the childhood they deserved and we felt that we had to do something about it.

“The demand for what we are offering has blown us away. It’s great that parents see the need to get their kids outdoors and understand that their children can learn just as much by being stimulated by nature. We are proud that we are helping to reconnect a generation of urban kids with the outdoors and bring them all the benefits that this offers.”