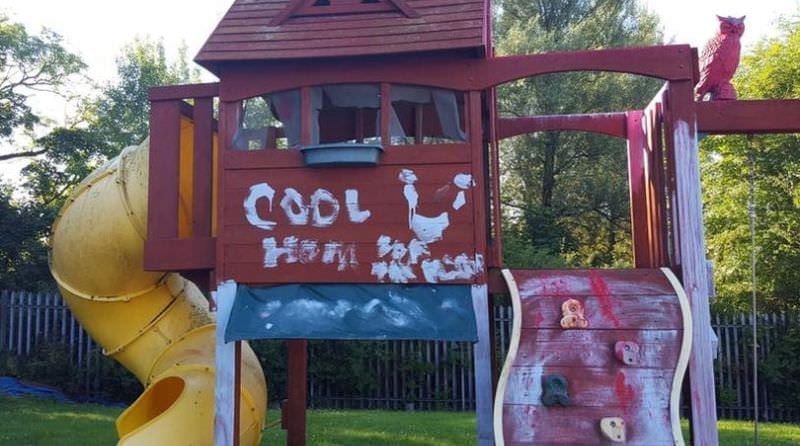 Little Scholars Nursery in East Kilbride were left shocked after their garden was vandalised. Police are investigating and trying to find the culprits behind the incident.

The staff arrived on Monday morning to find graffiti on the walls and climbing frame, broken toys scattered, their greenhouse pulled apart and planters destroyed.

Marianne Brolly said she had been alerted by the nursery’s owner of what had happened on Sunday, but was not prepared for what she saw.

Marianne said: “When we came in on the Monday morning to open up, we walked through and saw rude things painted on the fire exit to the garden.

“We opened the door and saw the climbing frame covered in paint. Then we turned around and saw more rude things written across the white walls.

“We walked around the garden and saw the greenhouse had all been pulled apart – that was just so horrible.

“One of the big planters had been taken out and smashed all the way down the path and decking area.

“There was paint everywhere, the toys were all out of the shed and pulled apart, it was very upsetting.

“We’re still trying to get to grips with what happened.”

Many of the children were confused and upset as to why they weren’t allowed out into the garden.

Marianne said: “The children all realised something had happened and the staff explained to them that some not very nice boys and girls had come in and made a mess of their garden so they couldn’t use it yesterday.

“Some of them couldn’t quite understand what was happening but the older children were aware. We promised to have it all cleaned up so they could go out and play today.

“Even though it wasn’t actually in the physical nursery, it’s still the children’s play area. It’s a place where these people shouldn’t have been and it feels like a bit of a violation of the nursery.

“The owners spent the whole day yesterday cleaning up the mess, power-washing the walls, but it still looks sad. I think the word would be sombre.”

Marianne said there was a silver lining to it, as the nursery has received a lot of support from parents and the community.

She said: “Parents have shared the news on Facebook and we’ve had people coming to offer help. The parents have been so supportive, and so have people who are not even involved in the nursery.”

Police are currently investigating the incident and the nursery is planning to get the community police to come in and speak to the children.