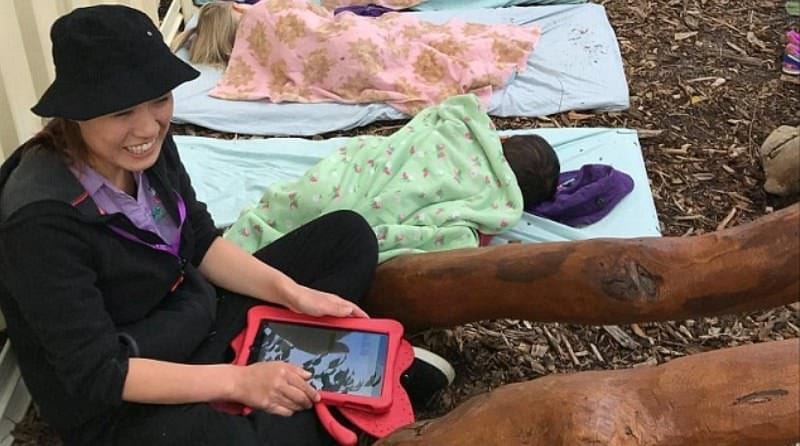 Little Learners tracked the number of absences taken by the children over an 11 week period. During those weeks, less than one percent of children took days off due to ‘winter-related’ illnesses.

The director, Ken Scott-Hamilton, put it down to the amount of time spent outdoors.

He said of the ‘phenomenal’ statistics, “We firmly believe that this statistic is a direct result of all of our children being outdoors more often and the older children (ages 2-5) sleeping outdoors more often, where they are able to breathe fresh air instead of being stuck inside with dry, recycled air that acts as an incubator which can allow the flu, virus and common colds to easily spread among the children.”

During the weeks of children sleeping outside, the centre tracked any changes of health and wellbeing of the children.

“We found that when the older children slept outdoors they slept longer, deeper and more serenely,” Mr Scott-Hamilton said.

“When they woke up they were significantly more refreshed, rested and rejuvenated than when they had slept inside.”

He also added that they had noticed a significant improvement in the children’s attentiveness, alertness and awareness after they had been sleeping outdoors.

“It’s important to note that at all times the children are given a choice as to where they would like to sleep,” he said.

“Also, when the children do sleep outdoors it is under the watchful eyes of our highly trained professionals who are constantly and dynamically assessing the children and nature on a minute by minute basis.”

He also said that 11 weeks was a short time, and the daycare centre would continue to monitor absences caused by winter-related illnesses.

“Due to the numerous ongoing significant benefits that we have seen regarding the older children sleeping outdoors and the support by all of our parents we have decided to implement effective immediately an outdoor sleeping policy,” Mr Scott-Hamilton said.

The policy has an opt-out basis for children aged two to five who require to sleep at the centre; it does not apply to babies who continue to sleep indoors.

“I am sharing this research and the outdoor sleeping policy that we have created in the hope that it may inspire other early childhood centres to, where possible, trial this practice of sleeping outdoors on a regular basis as already occurs in other countries,” Mr Scott-Hamilton said.