Campaigners protest against the closure of Harvey Nursery 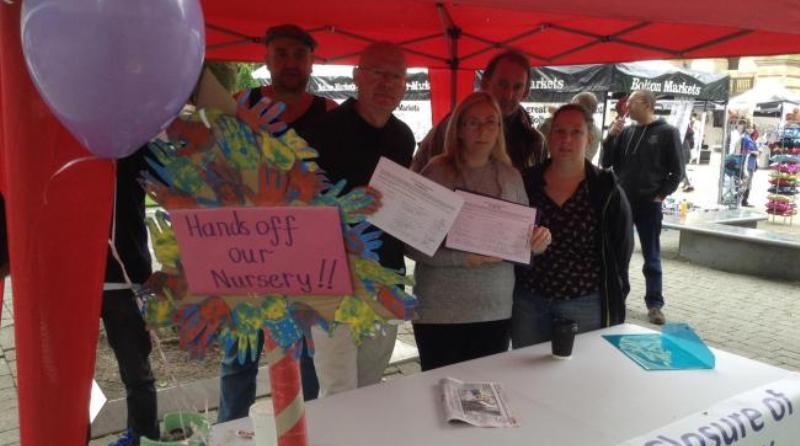 Harvey Nursery in Great Lever, Bolton is the borough’s last council-run nursery and now faces the possibility of closure.

Over the weekend, campaigners took to the town centre to try and gain signatures to oppose the closure of the nursery.

Town hall chiefs have now launched a consultation over the future of the nursery, claiming that budget pressures mean they can no longer afford to run the nursery.

However, campaigners have argued that the nursery is vital for the families in the area and the cost of running it was no more than a ‘drop in the ocean’.

Neil McAllister, chairman of Bolton Trades Council and a Unison branch secretary, has questioned the council’s priorities and said: “What the council claim is running at a deficit we would just say is a cost. It’s £60,000 or £70,000 a year to run it and we think that’s a bargain for such a good-quality nursery. We say that’s a cost — why they call it a deficit, I don’t know.”

He continued: “It’s a high-quality run nursery in an area of very high need that serves a lot of the most vulnerable and poorest families. And with so many different resources under one roof, we think it is a bargain.

Deputy council leader Linda Thomas said: “Harvey Nursery is a popular, good quality nursery, so the decision to go down this route is regrettable but unavoidable. Each year we have had to find more and more savings within the council, and we are now in the position where our options are running thin. However, I must stress that we are in consultation so no final decision has been made.”