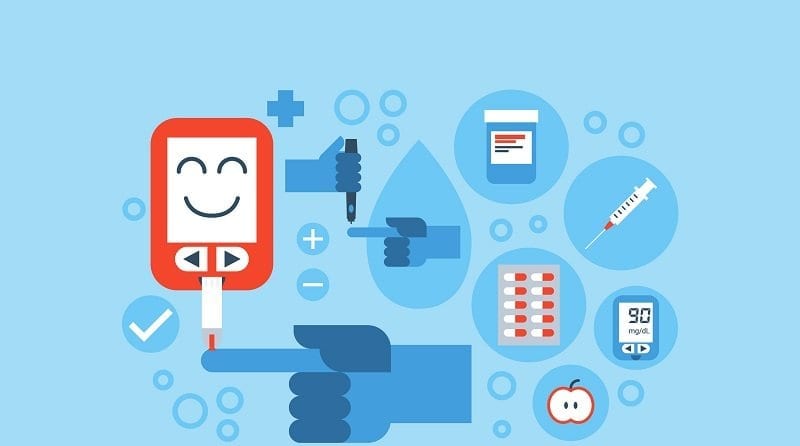 World Diabetes Day falls on the 14th November each year and aims to promote a global awareness of the condition. This date has significance as it marks the birthday of the man who co-discovered insulin, Frederick Banting.

Including the number of people who are living with the condition but are undiagnosed, there are an estimated 4 million diabetics across the UK. That’s roughly 1 in every 16 people! You may ready know of a friend, relative or child at your setting who has diabetes.

Diabetes is a life-long health condition which occurs when the level of glucose in the blood is too high because it can’t enter the body’s cells. High blood glucose levels can cause serious health conditions such as blindness, heart disease and kidney failure if left untreated.

Insulin, a hormone produced by the pancreas, plays an important role in regulating glucose levels in the body. Normally, after we eat, our food is broken down into carbohydrates then glucose to be used as energy. In this process, insulin can be seen as the “key” which unlocks the door to our cells, allowing glucose to enter. However, for a diabetic, their pancreas does not produce enough insulin to make this process possible.

There are 2 common forms of diabetes which can occur:

Type 1 diabetes is an autoimmune condition where the body attacks insulin-producing cells, meaning that no insulin is produced. An estimated 10% of people with diabetes have this form of the disease.

Type 2 diabetes is the most common form of the disease, diagnosed in around 90% of diabetics. It occurs when the body either doesn’t make enough insulin or the insulin it makes doesn’t work properly.

There are a variety of symptoms which could indicate whether a person has diabetes. In Type 1 diabetes the following symptoms can develop quickly, often over the course of a few weeks. In Type 2 diabetes, they are much slower to appear. For this reason, people may have Type 2 diabetes for a number of years without realising.

The symptoms of diabetes are grouped under the 3P’s:

A visit to a GP is the most definitive way to confirm whether a person is pre-diabetic or is suffering from undiagnosed diabetes.

Long and short-term complications associated with diabetes can impact on different parts of the body including eyes, heart, kidneys, nerves and extremities of the hands and feet.

Those who suffer from diabetes are at risk of hypoglycaemia – this is when the glucose level in the blood is too low. This could be due to such factors as missing or delaying a meal or doing a lot of exercise without having extra carbohydrate.

The opposite is hyperglycaemia – this is when the glucose level in the blood is too high. This could be due to such factors as missing a dose of medication or eating more carbohydrate than that person’s body and/or medication can cope with.

Supporting a child with diabetes

It can be helpful to note that certain physical activities, such as exercise, and other factors like stress or illness can also influence blood sugar levels. Therefore, it’s essential for care providers to be able to recognise what the symptoms are of high and low blood sugar levels in a diabetic child and be able to react accordingly.

For more detailed information on caring for a child with diabetes in school, click here.