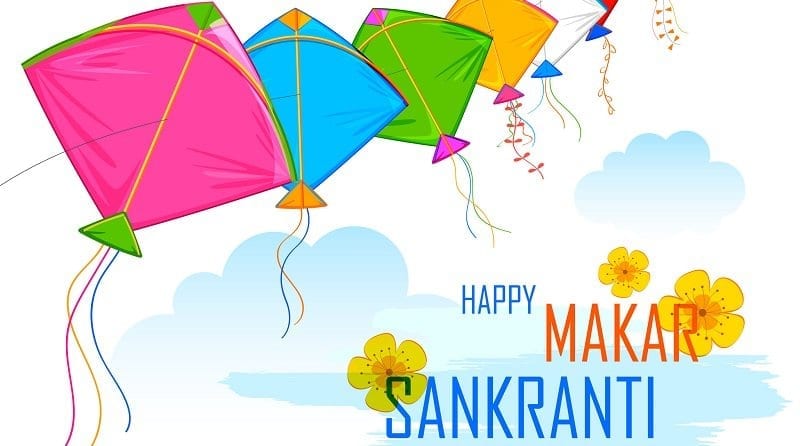 Makar Sankranti is the only Hindu festival to be celebrated on a fixed day of the calendar each year – the 14th January. The word ‘Sankranti’ literally means movement and the festival celebrates the sun’s journey into the Northern Hemisphere. This period of time is considered to be highly auspicious by those who celebrate it.

Makar Sankranti is known by multiple names: In West India, it’s known as Makar Sankranti, in North India as Lohri and South India as Pongal. The festival is estimated to be around 2,000 years old and marks the end of the winter solstice (the point at which the days start to lengthen again).

How is it celebrated?

There are lots of different ways to celebrate Makar Sankranti and these can vary throughout India. The festival is usually marked with social festivities such as dances, putting up colourful decorations and feasting.

During this time, many homes will be decorated with rangoli (patterns made using coloured rice, dry flour, coloured sand or flower petals). An exchange of gifts usually takes place between relatives, as Makar Sankranti is a reminder to be thankful to those around you. In addition to this, prayers of gratitude are normally said.

Flying kites is a tradition observed by many during this festival. Whilst it’s a fun activity for adults and children alike, it also serves for Hindus as a metaphor for God holding the string of man. The turbulent push and pull of life enables the kite fly higher. This activity is considered by those who celebrate Makar Sankranti to be good for skin, helping to fight illnesses caused by the cold weather.

Makar Sankranti is seen as an auspicious time to do good deeds, including donating items like clothing, blankets, rice and porridge to those less fortunate. Animals are honoured during this time, too. In India, cattle are dressed with paint, flowers and bells. They’re allowed to roam free and treated to sweet rice and sugar cane.

Across many parts of India, it’s common for people to eat Sankranti sweets which are made from sesame seeds and a sugary base known as jaggery. The sweets symbolise affection and togetherness. Another delicacy is Paathishaapta, which is a kind of sweet crepe or stuffed pancake made with coconut and the sap extract of date palm trees.

Suggestions for your setting:

Will you be celebrating Makar Sankranti at your setting? Let us know at marketing@parenta.com