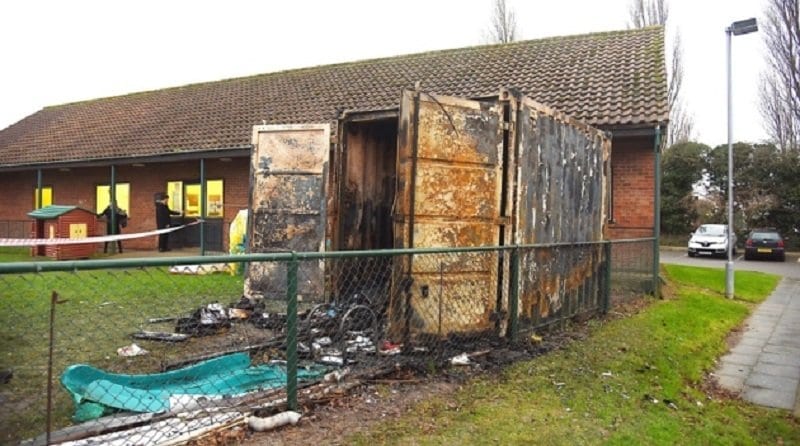 Little Angels Pre-school has had an arson attack on their storage container, destroying thousands of pounds worth of toys.

The fire happened around 6 am on Friday and became so intense that three nearby climbing frames completely melted. The toys had been put in the storage container over the Christmas holidays.

Deputy manager Helen Bell said the fire has completely destroyed thousands of pounds worth of equipment, some of which was irreplaceable.

“It is not a good start to the new year,” she said.

“We are a charity and we had built up all this stuff over almost 20 years, some of it just can’t be replaced.

“We stored all of our indoors toys in there and next to container was three climbing frames – the heat from the container was so much that it melted them. The children are back on Monday and have been left with no outside play equipment at all.

“It is thousands of pounds lost.”

Norfolk Police believe that the fire was started deliberately and that it could have been linked to a similar incident which occurred at 7:30 am at a town council building.

Miss Bell also said that on Wednesday night, or early morning Thursday, there was a break-in. The lock to the storage container had been damaged and a new gazebo had been smashed.

Local mayor George Acheson confirmed that on the same night there was an attempted break-in at a town council-owned garage, which is only 30 yards from the nursery.

He added: “We’ve also had an arson attack on a bench in Aldiss Park some months ago and in addition we have had other benches vandalised in Millenium Park and St Peter’s Garden. I know of no connection between these incidents but I suspect that the council will want to consider enlarging its CCTV coverage.”

Norfolk Police have warned the public to be vigilant. Fakenham inspector Ed Brown said: “Fortunately no one has been injured in either of these incidents however fires have the ability to spread quickly which has the potential for unintended consequences.

“We would advise businesses to check that outside areas are properly secured to prevent against unlawful access. In both of these cases, the perpetrator has entered a storage area before starting a fire.

“If we remove the opportunity we reduce the likelihood of these types of offences occurring. The timing of these offences also suggests that whoever is responsible is out and about in the town first thing in the morning when there are few people moving about.

“We will be increasing our patrols at these times.”