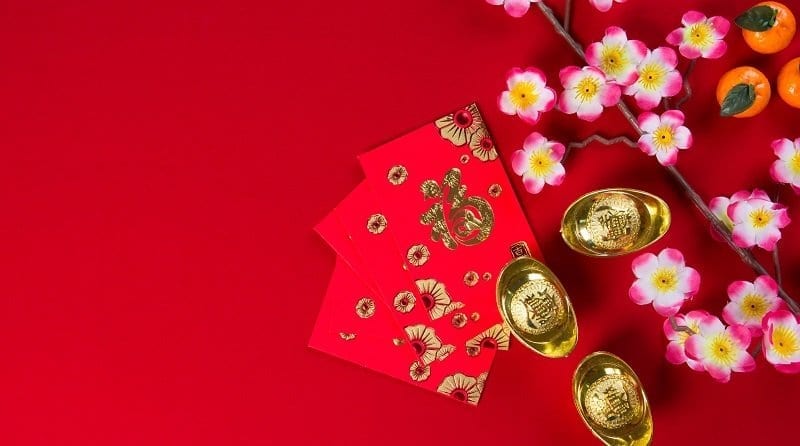 Chinese New Year is the longest and most important of all the celebrations in the calendar for Chinese people. It signals the beginning of spring and therefore is often referred to as the spring festival. This period marks the start of a new cycle of sowing and other farming activities in China.

Chinese New Year has been celebrated for thousands of years. According to legend, Buddha asked all the animals to meet him on Chinese New Year. 12 animals came to him and he named a year after each one.

Other animals in the Chinese zodiac include the rat, the ox, the tiger, the dragon, the rabbit, the snake, the horse, the sheep, the monkey, the rooster and the pig.

Chinese people believe that the Chinese New Year heralds the start of new beginnings and preparations for the big day can begin many weeks in advance. It’s very much a case of “Out with the old, in with the new.” Ahead of the festivities, people will declutter and clean their homes, pay off the previous year’s debts and buy new clothes.

In Chinese, the word for “dust” is the same as the word for “old” (Chen). Thus, carrying out a thorough clean of the family home is seen as a means to drive out bad luck and clear old things away to prepare for a new start.

Returning to the family home

The Chinese New Year is a time to spend with family, so many people travel to be back home with loved ones. Homes will be decorated with red (a traditionally ‘lucky’ colour) and gold (to symbolise good fortune). Emblems and decorations depicting the Chinese zodiac animal for that year will also be displayed.

During this time, it’s common for friends and family members to give children red envelopes containing money. The red envelopes are known as hong bao (in Mandarin) or lai see (in Cantonese). The amount of money given is usually an even number which cannot be divisible by 4. This is because, in Chinese culture, the number 4 is seen as unlucky and represents death. Some children even have red envelope apps, so their relatives can transfer money to them digitally.

It’s a widespread Chinese tradition to display a Fu (a symbol of good fortune and happiness) in the entrances and windows of homes and businesses. Displaying this symbol upside down is believed to mean the arrival of prosperity, as the Chinese word for ‘upside down’ and ‘to arrive’ are exactly the same. Mounted Fu are printed on a square piece of paper or stitched into fabric.

It’s traditional to send greetings cards to friends and family, especially if a person will not be able to celebrate New Year’s Eve with them. Similarly to Christmas cards, words expressing blessings and good fortune are exchanged.

On New Year’s Eve, families will get together to share a meal, followed by Shou Sui (staying awake as long as possible) after this meal has been eaten. After midnight, fireworks are set off to scare away evil spirits and bad luck.

There are several traditions which follow after New Year’s Day. On the third day of celebrations, the Chinese honour their ancestors. Family members pay respect to their deceased relatives by visiting graves or lighting incense or paper offerings in memory of loved ones.

On the fifteenth day, the Yuan Xiao festival is held. This is also called the lantern festival, which officially marks the end of Chinese New Year celebrations. Lions are seen as symbols of strength and bravery and lion dances are commonly performed at important events such as the lantern festival.

Coming together with family and friends and having a feast is a very important part of celebrating Chinese New Year. Each family will have their own customs and traditions around food depending on what region of China they’re from.

Certain foods are believed to symbolise different things. For example:

On New Year’s Eve, dumplings are often served. These come in a variety of different fillings. As these dumplings are shaped like money bags, it’s believed that they’ll bring wealth and good fortune in the coming year.

Tips to celebrate Chinese New Year at your setting

– Make and hang up red paper lanterns as decorations
– Have children dress in items of red clothing on New Year’s Day (16th February)
– Watch a traditional dragon or lion dance if one is being hosted in the local community
– Let the children use chopsticks to eat noodles or rice
– Invite members of the Chinese community to come to your setting to discuss Chinese New Year traditions. Alternatively, a local Chinese restaurant may be able to host the children for a visit to learn more about the celebrations
– Make ‘Year of the Dog’ greetings cards for the children to colour in
– Let children decorate red envelopes and add a piece of chocolate money inside