Schoolchildren raise £180 for the Parenta Trust by selling cakes 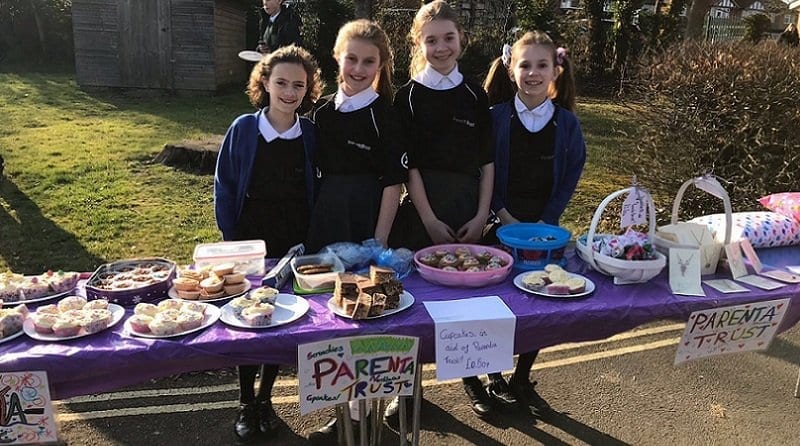 On the 23rd February, a group of friends from Chandag Junior School in Keynsham came together to raise money for the Parenta Trust.

Eva, Emily, Lily and Kitty sold homemade cakes, handmade hair scrunchies, pillows and necklaces on their school drive to help fund the build of the charity’s next nursery.

Eva Presland,10, decided after Christmas that she wanted to do something to help the Parenta Trust. Her parents, Suzi and Dave, sponsor a girl called Gift in Good Shepherd Nursery School and have visited Uganda to see the work of the charity firsthand.

Eva asked her head teacher’s permission to organise the fundraiser, put up posters to advertise it and even asked if it could be featured in her school’s newsletter.

The event took place from 3 pm for half an hour and the girls’ efforts were rewarded with great success, raising £180 in total.

Eva said: “I saw the photographs of the Kampala slums, heard about how the schools were making a difference to other children in Africa and wanted to help. I really couldn’t believe how much we had raised! I was amazed about how generous people were because some people gave money and didn’t buy anything.

“When I heard how much we’d made I got a bit teary but I was so happy because the money really can help change lives.”

The Parenta Trust will be commissioning their sixth pre-school this year, to help orphaned and disadvantaged children benefit from a basic education. Since the charity was started in 2013, a total of 4 schools have been built and a fifth school has been commissioned.

The charity depends on the generosity of its supporters and fundraisers to keep carrying out its life-changing work in Africa.

To find out more about the work of the charity or to sponsor a child, visit Parenta Trust.