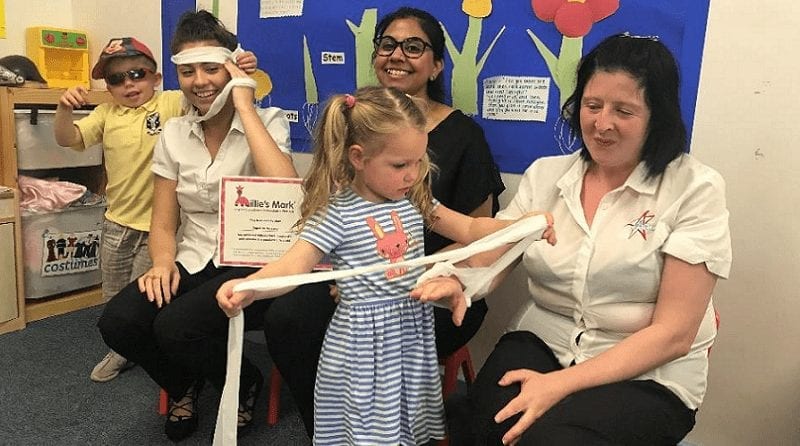 Capellas Nursery who work in partnership with Solihull Sixth Form College have today announced that it has received national recognition for going above and beyond the minimum requirements in paediatric first aid. This is a highly selective award with Capellas being the first Nursery in Solihull to receive it. With its robust processes and documentation, the nursery staff strive to keep children safe by minimising risks and accidents which gives parents that greater reassurance.

Capellas Nursery Solihull has been awarded Millie’s Mark by National Day Nurseries Association in collaboration with the Department for Education and Millie’s Trust. Millie’s Mark is named after Millie Thompson, who tragically died as a result of choking in a nursery in 2012. Her parents Dan and Joanne Thompson have campaigned for all staff to have paediatric first aid training and having Millie’s Mark demonstrates that nurseries have met this. In addition, it shows they work hard to keep these crucial skills in the forefront of employees’ minds, so they are competent and can apply them in any situation.

“I would like to extend hearty congratulations to the all of the staff at Capellas Nursery in Balsall Common on achieving ‘Millie’s Mark’ accredited status. This award will undoubtedly serve to reassure parents of their outstanding to commitment to the health and wellbeing of children at the nursery, which caters for babies and children up to 5 years old”.

“Having already been commended by Ofsted for their inclusive approach, I am delighted to see that the nursery continues to strive towards achieving excellence in all fields”.

Dr Martin Sullivan, Principal of The Sixth Form College, Solihull, commented: “Congratulations to Capellas on achieving this prestigious quality mark. We have many staff at the College who use the nursery for their own childcare needs and they speak warmly of the service provided, so this accolade comes as no surprise to us. We enjoy working with Capellas and look forward to a bright future together.”

Purnima Tanuka, Chief Executive of National Day Nurseries Association (NDNA) adds: “Achieving Millie’s Mark is a great achievement for the nursery, it shows that all staff are fully trained in paediatric first aid and that they have reflected on their current practice to improve confidence and competence. Becoming a Millie’s Mark Nursery is a clear indicator to parents that this Nursery has met the highest standards and gives them reassurance that their children are safe.”