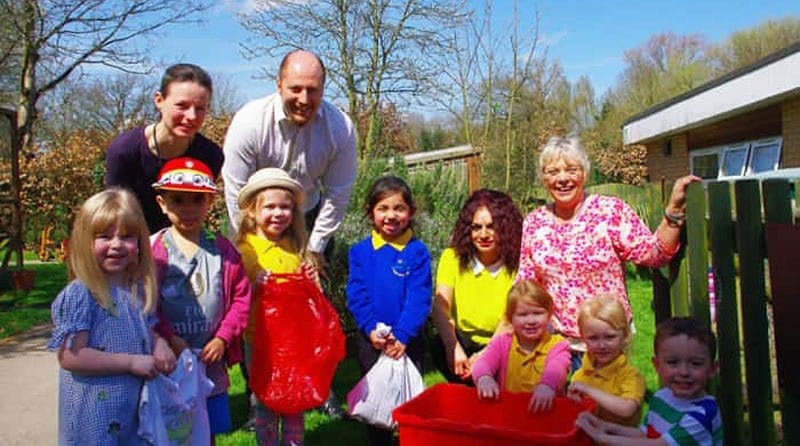 Children and staff at Warwick nursery celebrate after coming first place in the ‘Don’t bin it, bag it’ recycling competition.

14 schools around Warwick took part in the competition which encouraged nursery and primary schools to collect the most textiles, clothing and shoes for recycling.

In total, 674 bags containing 3.3 tons of textiles were collected from everyone who took part in the competition.

The results were based upon the number of textiles collected per pupil with Warwick Nursery school coming first place by gaining 3.29kg per pupil and claiming the top prize of £500 in vouchers.

Headteacher at Warwick Nursery School said: “As a Silver Award Eco School, the Nursery encourages children to think about reusing and recycling and the parents, staff and children embraced ‘Don’t bin it, bag it’ enthusiastically.

“We would like to thank our parents who took part and we are looking forward to spending our vouchers to buy new resources for our dedicated provision for two-year-olds and three to four-year-olds and to further develop our gardening sessions, mud kitchen and Forest School in our extensive outdoor area.”

Councillor and Portfolio holder at Warwick District Council said: “It was great to see so many of the districts nursery and primary schools not only rising to this challenge but also using the competition as an opportunity to teach children and their parents the importance of reusing and recycling unwanted items in the future.”

Vincent Kilby, Contract manager for SUEZ recycling and recovery UK said: “We ran the competition to help raise awareness that householders can recycle their unwanted clothes, shoes and textiles, simply by putting them in a bag next to their recycling box and bags, and were delighted with the response we received from local schools.

“I’d like to thank all schools who took up the challenge and congratulate our winners, Warwick nursery School for their outstanding effort.”