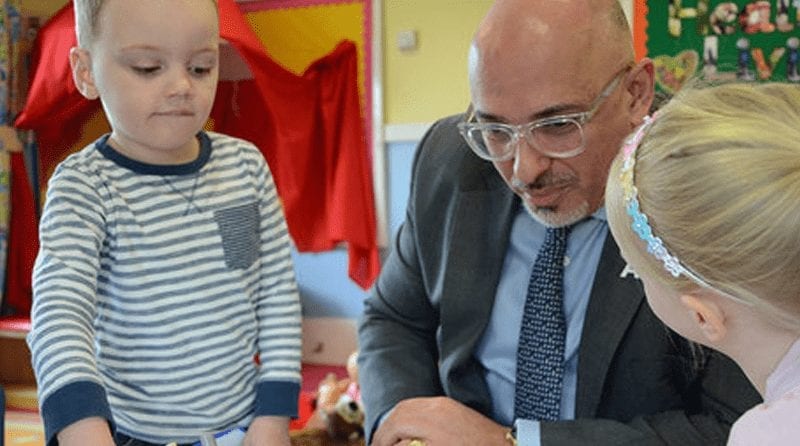 Children’s minister Nadhim Zahawi has dismissed concerns about the 30 hours funding to MPs in Parliament.

Mr Zahawi was replying to a parliamentary question asked by Labour MP for Liverpool, Dan Carden, who spoke about research which was published last month by the National Day Nurseries Association. The charity’s annual survey showed that nurseries in England providing the 30 hours have a funding deficit of over £2,000 per child per year.

Mr Carden said, “That means that nurseries are struggling financially; a skills shortage as workers quit the sector; and fewer nurseries for parents to send their children to, or more nurseries with under-qualified staff. When will the minister conduct an honest review of the chaos that he has caused across the sector?”

Mr Zahawi replied, “Thirty hours is a success story. The summer numbers are 340,000 children aged three and four benefiting from 30 hours a week free childcare. For those parents taking advantage of that, that is a £5,000 saving a year. We are conducting a review to look at the economics of the model, as we have done in the past, when we raised the hourly rate from £4.65 to £5. It is a huge success story, and clearly the Hon. Gentleman is running scared.”

MP Tracy Brabin pointed out that the NDNA report had also found that a third of nurseries are having to limit the funded places they offer and a third of nurseries are being paid late for the work they do. She said, “To support our childcare providers, will the minister tell us how many local authorities will see a real-terms funding increase in the next academic year?”

Mr Zahawi replied, “The Hon. Lady rightly speaks about the important research by the NDNA. Our own research demonstrates that 80 per cent of providers are willing and able to offer places, and one third have actually increased their places.”

Chief executive of the NDNA, Purnima Tanuku commented on this, saying: “We are deeply concerned that the minister is brushing off the genuine, widespread concerns about 30 hours from the sector.

“Mr Zahawi calls this a success story for parents – but it’s disastrous for nurseries. In ignoring our evidence about the growing shortfalls in funding and refusing to review the recommendations made by the Treasury Select Committee, we may be heading for more nursery closures which will further limit childcare choices for parents.

“Like the minister says, 80 per cent of providers are delivering funded places – but only by limiting the number of places for two-, three- and four-year-olds.

“Nurseries would be willing to offer even more places if the funding was sufficient.  The minister claims to have raised the hourly rate to £5. But according to figures released by the DfE for 2018/19, 73 per cent of local authorities pay less than £5 per hour and 31 per cent pay the lowest rate of £4.30.

“Many members tell us they have no choice but to offer this otherwise they would lose their two- year- olds to settings that did offer additional hours to make sure parents could secure 30 hours when their child turned three years of age. Offering more 30-hour places that their business model can cope with will in turn cause business failure due to the huge losses nurseries are incurring.  The average annual shortfall in funding per child is £2,166. They are hindered if they do and hindered if they don’t!

“This policy is seriously undermining the Government’s social mobility agenda, as well as the policy drive for parental choice.  If the Minister continues this line, there won’t be a choice for parents as there will be fewer nurseries to deliver the 30-hour promise!”