The unexpected truth about teaching colour and number recognition 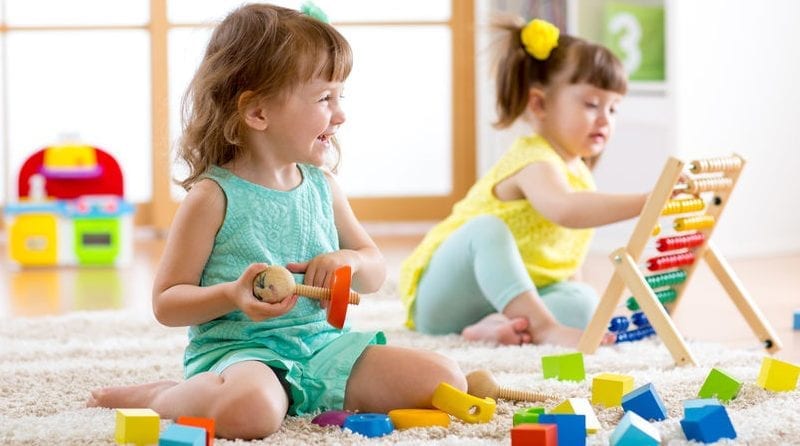 Have we got it wrong?

A small group of pre-schoolers are playing at the sand table. Some exciting props have been added, along with a dozen or so brightly-coloured diggers, tractors and trailers. The children are engaged and happy, and the practitioner is modelling talking about colours, numbers and position.

“Look, your blue tractor is going up the hill!”

This is certainly how I have presented colours and numbers in my own practice. But it seems that I may well have been misinformed. According to a recent study, such traditional intentional colour and number recognition teaching is more likely to confuse children than help them. And, considering that pretty well all practitioners present colours and numbers in this way, it may be a very good thing to explore this a little further.

The obstacles of English grammar

English colours are particularly difficult to learn. Our rules of grammar put the colour firmly before the noun, “I’ve got a red balloon.” When we name colours like this, they resemble proper nouns: Red Balloon, a bit like Peter Smith.

Likewise, with numbers, English grammar places the number word before the object: “We’ve got three biscuits.” This so-called prenominal naming of numbers or colours is the confusing part. We are drawing a child’s attention to the object while asking them to recognise the colour or number at the same time. As a result, their attention becomes divided, and the number or colour word can get lost.

A study[i] a few years back considered how young children learn colour words. They conducted a series of tests on two-year-olds to see if they could correctly identify colours in a three-colour line-up.

There was an unexpected result. Almost all of these two-year-olds could not pick out the right colours. Their parents were astonished! Surely their child would pass the test with flying colours, if you’ll pardon the pun. But of course, the context-free testing environment totally stumped the children. While they were more than capable of producing colour words in familiar contexts like “Yellow banana!”, they simply could not reliably use colour words in unfamiliar contexts.

This testing of colour recognition was followed up with postnominal training to one group of children (saying the colour after the noun) and prenominal training (saying the colour before the noun) to another group. It was discovered that the postnominal group improved significantly, learning colour words rapidly. The other group showed no signs of learning.

This is an eye-opener. The children’s colour recognition was significantly strengthened when adults modelled putting the colour name after the noun: “I’ve got a balloon that is red.”

Another study[ii] tested number recognition in children aged between 30 and 40 months. Half the children were given prenominally phrased questions (number before the object) and the other half postnominally (number after the object).

Testing the hypothesis in our settings

How about we investigate this in our own settings?  Within highly appealing and familiar contexts, let’s talk postnominally with children about numbers and colours (number/colour after the object). For English-speaking children, we use colour words prenominally about 70% of the time. Presumably the same applies for number words. Imagine the difference we can make by changing our approach.

Haul out the tuff box and fill it with different coloured wooden blocks. Create an irresistible world of diggers, tractors and lorries with sand play. Put lots of ocean small world into the water tray, delivered with a whole load of greenery that looks like seaweed.

And then, enjoy the number and colour chitchat you can share with the children. You may occasionally find yourself talking a bit like Yoda from Star Wars, but your efforts will not be in vain.

“Let’s find the tractor that is blue.”

Can something so simple make such a difference? Go ahead and find out!

[i] Michael Ramscar, Kirsten Thorpe and Katie Denny (2007) Surprise in the learning of colour words

[ii] Michael Ramscar, Melody Dye et al (2011) The Enigma of Number: Why children find the meanings of even small number words hard to learn and how we can help them do better

Helen Garnett is a mother of 4, and a committed and experienced Early Years consultant. She co-founded a pre-school in 2005 and cares passionately about young children and connection. As a result, she has written a book, ‘Developing Empathy in the Early Years: a guide for practitioners’. She has also co-written an Early Years curriculum and assessment tool, at present being implemented in India. Helen is also on the Think Equal team, a global initiative led by Leslee Udwin, developing empathy in pre-schools and schools across the world.